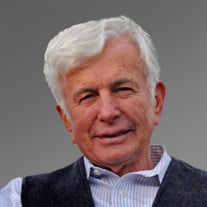 Ortize Nathan Thompson, Jr. (Tommy; so fondly known by his work associates) completed his journey in this life April 5, 2020 in North Logan, Utah. He was born March 5, 1932 in Hiawatha, Utah. Ortize was the fourth child of Ortize Nathan Thompson and La Vera Briggs. When Ortize was ten years old the family moved to the “big city” of Salt Lake City where he finished grade school and junior high. The family again moved to Farmington, UT where he finished high school at Davis High. On September 10, 1952 he married Shirley Gay Turner in the Salt Lake Temple and started their eternal journey together. After earning a degree in Metallurgy Engineering from Utah State University, Ortize moved his young family to the San Diego, CA area where he worked for General Dynamics until the opening of Thiokol (ATK/Northrop Drummond), at which point he returned to live in Logan, UT and was employed by Thiokol for 36.5 years. Some of his accomplishments at Thiokol were; developing the case for the Minuteman, Space Shuttle, the Harm, and the Standard Missile motor. Ortize loved going on fishing trips to the Unitas and he had a special love for his horses and had a soft heart for animals. He was an avid gardener and much of his time was spent helping others. He was a skilled wielder and shared his talent with anyone in need. Ortize was a faithful member of The Church of Jesus Christ of Latter-Day Saints and served in many callings. Ortize and Shirley served a mission in New Zealand from 2001-2003 and he served as an officiator in the Logan Temple for more than 11 years. Ortize is survived by his wife of 68 years; his children Mark (Karyn Christensen) Thompson, Marianne (Lex) Porter, Holly (Blake) Brog, and Laurel (Jeff) Killian; 20 grandchildren; and 31 great-grandchildren. He is preceded in death by his daughter, Teri Gay, and great-grandson, Mack; his parents, a sister, brother, and two brothers-in-law. A private graveside for the family will be held on Thursday April 9, 2020. Arrangements by Allen Mortuary of North Logan. www.allenmortuaries.com

Ortize Nathan Thompson, Jr. (Tommy; so fondly known by his work associates) completed his journey in this life April 5, 2020 in North Logan, Utah. He was born March 5, 1932 in Hiawatha, Utah. Ortize was the fourth child of Ortize Nathan Thompson... View Obituary & Service Information

The family of Ortize Nathan Thompson created this Life Tributes page to make it easy to share your memories.

Send flowers to the Thompson family.