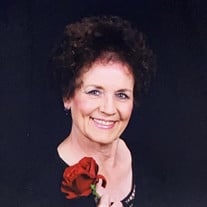 Patsy (Pat) Jean Wursten passed away Thursday, April 15, 2021, surrounded by her family after valiantly fighting against complications from a series of surgeries at the age of 81. Pat was born in Logan, Utah on October 19, 1939, to LaDell Mervin Larson and Norma Dorothy Crockett. She was the third of five daughters. She grew up in Twin Falls Idaho and was 1st runner up in Miss Twin Falls in 1958. Then returning to Logan she attended Utah State University and was affiliated with the Chi Omega sorority. She then met and married Stephen Croft and had 6 children then were later divorced. She then met the love of her life and soulmate, Leon Mark Wursten, who had two children from his previous marriage. They then were married in 1973 and later had a son. They then were sealed in the Ogden Temple for time and all eternity. Pat and Leon were married for 48 years and have remained faithful members of the Church of Jesus Christ of Latter-Day Saints. She spent most of her life being a homemaker and serving others with the pure love of Christ. She loved painting, cooking, camping, fishing, hunting, gardening, sewing, spending time with her family, and many other things that brought joy to her life. Pat and Leon lived in Logan, Mendon, and then later resided in River Heights. Pat was preceded in death by her father LaDell Larson, infant son Louis Scott Croft, mother Norma Crockett, grandson Kellan James Jeppesen, sisters Carole Barton (Dick) and Kaye Hanson (Ken), and stepfather Evera Junior Morgan. She is survived by her husband Leon and their 8 children, Cheryl Ann Barnhurst (Faro), Stephen Robert Croft (Jennifer), Stanton LaDell Croft, Carole Jean Jeppesen (Bruce), Leon Mark Wursten Jr. (Raine), Jack Croft, Teresa Marie Stanziole (Sam), and Michael Leigh Wursten (Mandy). She is survived by her 26 grandchildren and 22 great-grandchildren. She is also survived by her two sisters, Janice Crandall (Ted) and DeAnna Durham (Frank), and by her 3 stepbrothers and 4 step sisters, Curtis Morgan, Stephen Morgan, Paul Morgan, Marianne Belliston, Krista Kelsey, Ellen Lee, and Zora Christensen. Funeral Services will be held at 1:00 pm Friday, April 23, 2021, at the Allen-Hall Mortuary, 34 East Center Street Logan, Utah. Friends may visit family Thursday, April 22nd from 6-8:00 pm and Friday, April 23rd from 11:30-12:30 pm at Allen-Hall Mortuary prior to funeral services. Funeral services will be live streamed and may be viewed via the following link: https://us02web.zoom.us/j/88048922536?pwd=eStmKy92bFc4bjAyZGVOUHFvZHBYQT09 (Password: Pat) Interment Providence City Cemetery, River Heights, Utah. Condolences may be shared at www.allenmortuaries.com

Patsy (Pat) Jean Wursten passed away Thursday, April 15, 2021, surrounded by her family after valiantly fighting against complications from a series of surgeries at the age of 81. Pat was born in Logan, Utah on October 19, 1939, to LaDell... View Obituary & Service Information

Send flowers to the Wursten family.