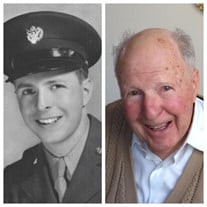 Paul Gordon Bastow, our sweet husband, father and grandfather, passed away peacefully January 25, 2021 at the age of 98. Born November 23, 1922 in Berkeley, California to Joseph Garfield Bastow and Irene Ricks Bastow. He lived in Oakland with his two older brothers, Joseph Jr. (Jay) and Wendell. They enjoyed exploring the hills, discovering an old cannon, and creating a little mischief. At one point, he and his brothers built a battle ship and exploded it in the bathtub, much to their mothers dismay. Paul loved knowledge and was continually learning throughout his life. At 15, due to his profound interest in astronomy, he spent months building a large telescope from old machine parts. Seventy-five years later, after moving the telescope across the country several times, he donated it to a high school, still in working condition. This telescope, which stayed with him a life time, epitomizes Paul's curiosity about the world, his love of knowledge, his work ethic and the skill of his hands. Paul began college at San Jose State University, but enlisted in the army when WWII was declared. In the Army Air Corp. he trained as an aerial photographer and waist gunner on a B24 bomber. Fortunately, as his crew was deploying for active duty, the war ended. On August 20, 1944, he married the love of his life, Beverly Eleanor Morris. Together they raised 4 children. Paul continued his education, graduating from San Jose State University with a degree in Industrial Arts Education. At Oregon State University, he received a Masters Degree in Education. He taught machine shop, drafting, auto shop and wood shop for 7 years at Redwood City High School, where he also served as a counselor. Following teaching, he worked for Hewlett-Packard as a manufacturing manager. After being transferred to New Jersey, Paul began his own business as a Systems Analyst and Consultant. He created and designed software that helped small businesses manage inventory, payroll and manufacturing processes. Paul often whistled while he worked. He was industrious and worked long hours. His children all believed he knew everything about the earth and sky. Paul loved camping and fishing with his family and traveling to see the world. He shared his financial wisdom, which included searching the ground for lost coins everywhere he went. He enjoyed coin collecting and amassed a collection of coins he divided amongst his grandchildren. He could fix, remodel or build anything. He often looked for projects, to help his family or someone in need. Paul designed and built two homes and remodeled a third. He loved photography, developing his own film for many years. He enjoyed making Sunday breakfast. He especially loved ice cream and was known to eat a half gallon at a serving. After retirement in 2001, Paul and Beverly settled in Star Valley, Arizona where he volunteered as a tax aide for the AARP until he was 88 and also volunteered at Payson Regional Medical Center for over 12 years. While he was able, he was constantly busy. Paul is survived by his wife of 76 years. Four children: Marsha (Ross) Larson, David (Carol) Bastow, Susette (Richard) Call, Kathleen Bastow; 9 grandchildren and 15 great grandchildren. He was preceded in death by his parents and his two elder brothers Wendell and Jay. Paul was a kind, thoughtful, loving husband, father, grandfather and friend, and will be deeply missed by all who knew and loved him. Internment and graveside ceremony at Logan Utah Cemetery, Friday February 5 at 1:00 pm. Condolences may be shared at meldrummortuary.com or allenmortuaries.net. Services will be live streamed and available to view via the following link: https://us02web.zoom.us/j/84374081505?pwd=TXJQTHJQRGd5bVRlb0VyazBqUHZWZz09 Password: Bastow

Paul Gordon Bastow, our sweet husband, father and grandfather, passed away peacefully January 25, 2021 at the age of 98. Born November 23, 1922 in Berkeley, California to Joseph Garfield Bastow and Irene Ricks Bastow. He lived in Oakland with... View Obituary & Service Information

Send flowers to the Bastow family.