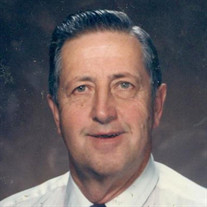 Paul Campbell Bitters, 85, passed away Monday, February 24, 2020 at his home in Logan after a short battle with cancer. He was born Dec. 21, 1934 in Millville, Utah to Franklin and Helen Cyrene Campbell Bitters. He was the youngest of five children. Paul spent his childhood and teenage years in Providence graduating from South Cache High School in Hyrum, UT. He started working for his father at age 12 doing add jobs until he was old enough to drive. Then with his new driver’s license and newly purchased car he began delivering groceries. Paul worked with his father and brother, Myral, in the family IGA Foodliner. In 1970 when The Foodliner was sold, he began working for Clyde and Sharlene Chatterton at The Drape Shoppe, later purchasing The Drape Shoppe. After several years in this Drapery business he began working at USU as the Housing Custodial Foreman until his retirement in 1999. In his earlier years Paul enjoyed fishing trips with his uncles and friends and hunting with his sons. Paul had a love of woodworking, spending many hours in his workshop building many items for his children and grandchildren. He has always had a fondness for birds and bird watching, especially Hummingbirds. Photography was another of Paul’s hobbies. Since his retirement he has enjoyed traveling, his ATV, meeting his friends for coffee in the morning and his daily drive up to the Bitter’s Family Cabin in Logan Canyon to feed his Hummingbirds. The cabin was Paul’s favorite place. He would rather be there than anywhere. We as a family have many fond memories spent at the cabin. Paul was 18 when he spotted a cute little carhop at Sawyers Drive-In in Logan. They dated while Alain was in High School. When Alain graduated, they married on October 12, 1954 in the Logan LDS Temple. They were blessed with four children: Jan (Scott) Daines of Hyde Park, UT, Scott (Karen Snarr) of Standsbury Park, UT, David of Hurricane, UT, and Mark of College Ward, UT. He is also survived by nine grandchildren and three great-grandchildren. Alain passed away March 10, 1972. He is preceded in death by his wife, his parents, brother Myral, and sisters Helen, Carmen, and Bertha. The family would like to express their sincere gratitude and appreciation to Intermountain Homecare and Hospice nurses, Natalya Bailey, Anna Trappett and aide Teaya Owen. Funeral services will be held in his honor beginning with a viewing on Tuesday, March 3, 2020 from 6 to 8 pm at Allen-Hall Mortuary, 34 East Center Street in Logan. The funeral service will be held on Wednesday, March 4, at 11:00 am with a viewing prior to the service from 9:30 to 10:30 am at Allen-Hall Mortuary. Interment will be in the Hyrum City Cemetery. Condolences may be expressed online at www.allenmortuaries.net

Paul Campbell Bitters, 85, passed away Monday, February 24, 2020 at his home in Logan after a short battle with cancer. He was born Dec. 21, 1934 in Millville, Utah to Franklin and Helen Cyrene Campbell Bitters. He was the youngest of five children.... View Obituary & Service Information

The family of Paul Campbell Bitters created this Life Tributes page to make it easy to share your memories.

Send flowers to the Bitters family.