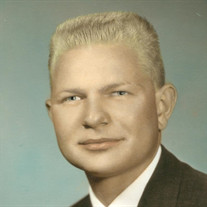 Paul H. Hoth, cherished husband, father, grandfather, friend, and mentor passed away peacefully on January 26, 2020, surrounded by his wife and children. Funeral services will be Saturday, February 1 at noon at the Logan 10th Ward Chapel, 792 N. 500 E. in Logan, Utah. Visitation will be from 6-8 pm on Friday, January 31 at the Allen-Hall Mortuary, 34 E. Center in Logan and from 10-11:30 am at the church prior to the funeral. Paul was born in Logan, Utah to Clarence Leland Hoth and Irene Littlefair Davidson Hoth. Learning a strong work ethic, he grew up in Cache Valley, where he raised his own family, and enjoyed staying close to friends and family. He passed his great love of the outdoors, hunting, fishing, and hiking to his family. Family was the most important thing in Paul’s life. He led through example and was a man of immense integrity. Service to his family, church, and community were his priorities. He served in numerous ward and stake callings throughout his lifetime. He served faithfully in the California Mission. He donated time for many years to the LOTOJA bike race and numerous other marathons. He attended City and County Council meetings frequently and was an advocate for the community, sending out surveys and statistically collating results to assure the neighborhood needs were met. He enjoyed high alpine backpacking in the Uinta, Wind River, and Beartooth Mountain Ranges, whitewater canoeing and rafting, and amateur radio. These activities all created memorable relationships with family and friends. Yellowstone and the Grand Tetons were two of his favorite destinations he visited several times a year. He had continued stamina for his passions despite pain in later years. He was a member of the Bush Memorials white water canoeing group for five decades, summited King’s Peak in his 60’s and white water rafted into his 70’s. Paul enjoyed a life of learning. He first earned a Master’s degree in Manufacturing Engineering and then, decades later, earned another Master’s degree in Environmental Engineering. Highly knowledgeable and respected, he worked at Thiokol for nearly three decades, then had the opportunity to incorporate his love of engineering and aircraft while working at Hill Air Force Base. He was preceded in death by his parents and brother, Gerald. He leaves behind Bonnie, his beloved wife of 50 years, six children, ten grandchildren, and his brother, LaDell. His devotion to family, his strong work ethic, honesty, integrity, and amazing attention to detail are admired and will be missed by all lucky enough to have him in their life.

The family of Paul H. Hoth created this Life Tributes page to make it easy to share your memories.

Send flowers to the Hoth family.