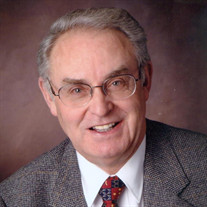 Paul Max Norton was born in Preston, Idaho on May 20, 1942, the oldest son of Max Loris Norton and Camilla Price Norton. He inherited his genuine interest in others and his love of a good laugh from his father, and his dedication to education from his mother. He liked to recount the story of a childhood horse that hated him and would purposely run under a tree branch to knock him off. As a youth he whistled a musical number in Sacrament Meeting. He served in the Central States Mission headquartered in Independence, Missouri, then earned a bachelor’s degree in Economics from Utah State University in 1966. While in school he married Sharon Cutler in the Salt Lake City LDS Temple in 1964. They moved to New York where Paul earned a master’s degree in Public Administration from Syracuse University, then they moved to Madison, Wisconsin, where they raised their four children. An entrepreneur at heart, he taught them to work hard with their shaved ice stand, Hawaiian Snow. Paul worked for the State Budget Agency, followed by the Educational Communications Board, which oversaw the 5 public television stations and 9 radio stations in Wisconsin. He also served as vice chair of the Public Broadcasting System board in Washington, D.C. One career highlight was being in the meeting where Sesame Street was pitched. An active member of the Church of Jesus Christ of Latter-Day Saints, Paul served as a bishop and stake president in Madison. In 1992, Paul and Sharon returned to Cache Valley where Paul took a position as the Vice President of University Relations and Development at his alma mater, Utah State University, where he helped to develop the American West Heritage Center and Festival of the American West, among many other accomplishments. From 2000-2003, Paul and Sharon served as mission leaders of the Illinois Chicago North Mission. Never one to sit still, Paul returned to Logan and became the director of Communications and Government Relations at Logan Regional Hospital until his retirement in 2008. Paul served in the church as a temple worker, sealer and stake patriarch. Paul showed genuine interest in everyone he met. Getting to bed early to get a good night’s sleep was a core principle. His grandkids loved it when he held their ears and gave their head a little shake to make sure they had their head on straight. He was never happier than when surrounded by his family enjoying a good laugh. Sharon cared for Paul devotedly in his waning years. Paul fought Parkinson’s Disease quite literally for several years with therapeutic boxing twice a week to keep up his strength. He is survived and adored by his wife Sharon; his siblings Bill, Steve, Stan, Beverly, and Bonnie; his children Sidney (Traci), Allyson (Matthew), John (Jenny), and Dianna (Casey); 26 grandchildren (with their heads on straight), and 2 great grandchildren. He is preceded in death by his parents Max and Camilla and his sister Catherine. A viewing will be held at NORTH LOGAN ALLEN MORTUARY at 420 East 1800 North on Friday, January 28th from 6-8pm. A second viewing will be held at the LOGAN EAST STAKE CENTER at 1450 East 1500 North on Saturday, January 29th from 11:30am-12:30pm, followed by funeral services at 1pm. Paul’s final resting place will be the Logan City Cemetery. We are grateful for all those who have extended their love and friendship over many years, as well as the caregivers at Maple Springs Assisted Living whose compassion and tenderness touch our hearts. In lieu of flowers, the family requests donations be made to Rock Steady Boxing at www.rocksteadyboxing.org. The community at Rock Steady not only provided prolonged physical functioning, but emotional and social support to Paul. The funeral will be live-streamed at www.allenmortuaries.net. Zoom Link: https://us02web.zoom.us/j/89445810634?pwd=MmhkNEZUVFVZdDR2RVZUaDA0WXAzQT09 Password: Norton

Paul Max Norton was born in Preston, Idaho on May 20, 1942, the oldest son of Max Loris Norton and Camilla Price Norton. He inherited his genuine interest in others and his love of a good laugh from his father, and his dedication to education... View Obituary & Service Information

Send flowers to the Norton family.