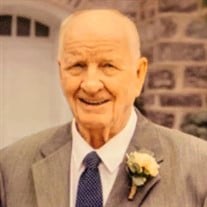 Paul Archibald Thorpe, 86, passed away peacefully on April 14th, 2022 at Blacksmith Fork Assisted Living in Hyrum, Utah of natural causes. Paul was born April 23, 1935, in Wellsville, to Leroy Brenchley Thorpe and Edna Archibald Thorpe. He was the 4th of five children. He married Linda Wyatt and had 3 children. They later divorced. Growing up Paul when he became old enough, spent a lot of his time milking cows, hauling hay and working on his Grandpa Archibald’s farm with his Uncle Elmer Archibald. Paul attended Floradell Elementary, Wellsville Jr. High and South Cache High School where he lettered in three sports, 3 years in football, 2 years in basketball and 2 years in baseball. He then went on to earn his master’s degree in education at USU. Shortly after he graduated from USU he was called to serve in the United States Army. He served 2 years, was deactivated, and came home, only to be reactivated a year later for just short of another 3 years. Upon returning home he worked at Thiokol, until he had the opportunity to become a teacher and coach at South Cache Jr. High. He taught art and coached football and basketball there for 20 years. He then moved to Mountain Crest High School where he became athletic director. He was honored as Outstanding Athletic Director of the year for the state of Utah in 1991. He retired from Mountain Crest in 1994, but continued to be a loyal fan and rarely missed a game. He was recognized as honorary fan at the homecoming game in 2012. Dad faithfully served in many LDS church positions and enjoyed doing temple work for many years. He was a great example to all of us and was the most kind, generous and caring person, he was always thinking of others. He rarely missed a birthday, dance recital, ball game or any other activity that his children or grandchildren were involved in. He went on several vacations with his family and friends, including cruises to, Alaska, the Western Caribbean, and the Mexican Riviera, as well as several tours to, Branson, Calgary and Nauvoo. He also went on an amazing trip to Israel with his sister Carolee and her husband Byard. In dads spare time when he was not spending time with his family or watching sports or traveling, he would put together jigsaw puzzles. He was preceded in death by his parents and his brother, Deloy Archibald Thorpe and sister-in-law Marlene Thorpe Baldwin. He is survived by his sister, Carolee Wood (Byard) North Logan, two daughters and one son, Perette Leishman (Lynn) Wellsville, Kami Nelson (Darrin) Hyrum, Jeff Thorpe (Jelena) St. George, 6 grandchildren: Casey, Marley, Shelby, Lindsey, Madisyn, Makenlee and 5 (soon to be 6) great grandchildren. A viewing will be held on Friday April 22,2022 from 6pm to 8pm at Allen-Hall Mortuary, 34 East Center in Logan. Funeral services will be held Saturday, April 23, 2022 at 11:00 am at the Wellsville 3rd ward chapel at 49 west 200 south in Wellsville with a viewing prior from 9:00 am to 10:30 am. Interment will be in the Wellsville cemetery. Paul’s family would like to express sincere gratitude to the staff of Blacksmith Fork Assisted Living and the health care workers there who cared so lovingly for him. AUDIO RECORDING OF THE FUNERAL - CLICK HERE

Send flowers to the Thorpe family.