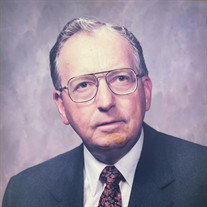 R. Paul Larsen died of heart failure on October 5, 2021, in Fairfield Village, Layton, Utah. Honesty and hard work were the principles Paul Larsen always instilled in his four children. Even as many of his children, grandchildren and great grandchildren greeted him the last couple of days, he kept up his humorous, gregarious personality. Paul’s work ethic began young. At age 6, he was milking cows on the family farm in Vineyard, Utah. “Here comes old icy fingers.” he could hear the cows muttering as he entered the barn on winter mornings. Paul was born in Vineyard, Utah, on December 1, 1926, to Ariel and Vera Austin Larsen, the second of five children. Among Paul’ s most memorable times as a youth were trips with his Grandpa Parley Austin selling produce in the Midwest. Parley Austin told many stories about walking to Utah before the railroad. Paul’s dream was to become the best dairy farmer in Utah, until his high school agricultural teacher and mentor, Wes Soulier, guided him towards a career in horticulture. “I decided it was lot easier to pick apples in September than it was to milk cows all winter, so I switched majors.” Paul often refers to his years in the Merchant Marines and hauling troops from the South Pacific. He saw many tears as their ship sailed under the Golden Gate Bridge. Then it was off to Utah State Agricultural College, where he received a bachelor’s degree in 1950, and he married his high school sweetheart and Orem’s Centennial Queen, Lorna Anderson, in 1948. Her work at the Logan Woolworth’s helped pay for his schooling. Paul received an M.S. degree in horticulture in 1951 from Kansas State University in Manhattan, where their first daughter was born. The Korean War took the family to Virginia, South Carolina, and Alaska, while he served as a quartermaster officer in the Army. After receiving a Ph.D. in horticulture from Michigan State University, East Lansing, in 1955, he served on the horticultural and extension faculty there until 1968. Three of Paul and Lorna’s four children were born during their Michigan years. After 14 years as the superintendent of Washington State University’s Tree Fruit Research Station in Wenatchee, Paul returned to Utah State University in 1982 as Vice President of Extension and Continuing Education, a position he held for ten years. Both in Wenatchee and Logan, Paul participated in a number of service activities. He was president of Rotary in both Wenatchee and Logan. He was chairman of Wenatchee’s 80th Anniversary celebration, Vice President of Columbia River Orchards, and President of the American Society for Horticultural Science. After retirement, they developed close friends by helping to re-develop the apple industry In Lebanon and Macedonia. Paul and Lorna also loved to take cruises around the world. Paul has published hundreds of articles. His monthly column in the American Fruit Grower, “Out on a Limb” also became the title of his autobiography “My life out on a Limb”. Paul was a lifelong member of the Church of Jesus Christ of Latter-day Saints and held many church positions throughout his life and developed numerous close friendships. Paul’s beloved wife of 67 years, Lorna, passed away in 2017. He is survived by four children, Nanette Dunford (Jack), Fremont, California, Peggy Rinehart (Mark), Bountiful, Utah, Mark Larsen (Connie), San Diego, California, and Cindy Bennett (Keith), Layton, Utah. He is also survived by 14 grandchildren and 25 great grandchildren. He is preceded in death by his parents, his brothers Austin and Dean, and his sisters, Genniel Dixon and Ruth Escher, and by a daughter-in-law, Kelly Smitheram Larsen. Family and friends are invited to a viewing for Paul Larsen on Saturday, October 23, from 10 a.m. to 11:30 a.m. at Allen-Hall Mortuary, 34 East Center St., Logan, Utah. A short service will follow. Burial will take place in the Logan City Cemetery. In lieu of flowers, donations may be made to the Paul and Lorna Larsen 4-H and FFA Scholarship, Utah State University. Livestream services are available at the following link, password "Larsen": https://us02web.zoom.us/j/81291201348?pwd=d3YrVEJPSjVPdElxUDM0YkkrSEhuQT09

R. Paul Larsen died of heart failure on October 5, 2021, in Fairfield Village, Layton, Utah. Honesty and hard work were the principles Paul Larsen always instilled in his four children. Even as many of his children, grandchildren and great grandchildren... View Obituary & Service Information