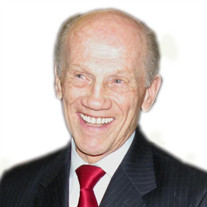 Ralph M. Roylance, 96, of Smithfield, died on Monday, May 9, 2022 at the time of 5:55 in Logan. Ralph was born on April 25, 1926 to Jesse M. and Hazel Miles Roylance. He and two sisters, Lucille and Ardell, were raised in Smithfield. Ralph attended the Summit School there, Smithfield Junior High and went on to graduate from North Cache High School in 1944. Ralph was always an athlete. As a 7th grader, he played tackle football on the 9th grade team in junior high. Ralph was also the regional champ in the javelin throw as a sophomore and won the state championship in that event in the two years that followed. He was a member of the second team All-Regional basketball squad at North Cache and a standout on the All-State football teams there in 1943 and 1944. At graduation, Ralph received the Plant Medal, honoring the high school’s most outstanding athlete. He joined the U.S. Navy after high school, serving until 1946. Ralph attended boot camp and was trained as a radio operator before shipping out to Guadalcanal. Assigned to the crew of an infantry landing ship, he participated in the invasion of Okinawa, the climactic battle of World War II in the Pacific, in April of 1945. Ralph earned new acclaim in athletics at Utah State University after the war. He excelled in the javelin toss and went on to become USU’s first All-American in Track & Field competition. He also received honorable mention as an all-conference running back, averaging 7.8 yards per carry for the Aggie football team. Ralph planned to test himself in international javelin competition during a 1950 tour of Europe and at the 1952 Olympics, but was thwarted by recurring bouts of malaria he had contracted during World War II. In 1950, Ralph accepted the responsibility of managing his family’s business. Over the more than six decades since then, he has devoted himself wholeheartedly to making Smithfield Implement one of Cache Valley’s most iconic and successful local businesses. In his spare time, Ralph pitched for the Smithfield Blue Sox for 15 years, breaking many strike-out and base-stealing records. He learned to ski at age 40 and competed aggressively in ski races throughout the western United States for decades. Ralph’s recent honors include being named Smithfield’s Outstanding Citizen in 1989; winning Gold Medals in his age division nine times in the Utah Nastar Ski Racing Finals; breaking records in the senior division at the Utah Summer Games; and being inducted into the Utah Sports Hall of Fame in 2000 and the USU Athletic Hall of Fame in 2009. Ralph fathered four children: the late Kent Ralph Roylance, Robyn Johnson of Boise, Teresa Vaughan of Boise and Bart Roylance of Smithfield. He was married to Nansi Roylance. Graveside Services will be held Wednesday May 18th at 12 Noon at the Smithfield City Cemetery where Military Honors will be provided. A viewing will be held the evening prior Tuesday May 17th from 6-8 p.m. at Allen-Hall Mortuary, 34 E. Center Street, Logan, UT. If you were not able to attend the graveside service for Ralph, an audio recording can be found by CLICKING HERE

Ralph M. Roylance, 96, of Smithfield, died on Monday, May 9, 2022 at the time of 5:55 in Logan. Ralph was born on April 25, 1926 to Jesse M. and Hazel Miles Roylance. He and two sisters, Lucille and Ardell, were raised in Smithfield. Ralph... View Obituary & Service Information

The family of Ralph M. Roylance created this Life Tributes page to make it easy to share your memories.

Send flowers to the Roylance family.