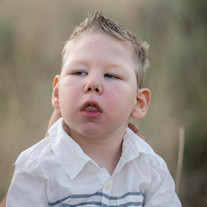 Ramie James Murray, 5, passed away peacefully in his home on February 5, 2022. He was born January 21, 2017 in Logan, Utah to Landon and Megan Murray. From the very start Ramie did things on his own time, starting out by crashing his own baby shower. At a month old he started having seizures, and several months later would be diagnosed with Malignant Migrating Partial Seizures of Infancy due to a KCNT1 gene mutation. This would bring many challenges in his life that he weathered with a strength only the strongest spirits could have and few have the privilege of witnessing. He would become an Earth angel to those who knew him. When he was born he looked just like his dad, inheriting the nickname Bug but having Mini added to the title. He will forever be known as Mini Bug. Although he couldn’t talk, he communicated with his bright baby blue eyes. You could always tell what he was thinking, whether it was through an eye roll, a sigh, or a light from his eyes that would brighten as he looked at you. He possessed a side smile that later turned into a big open mouthed smile that could melt any heart. He was always complimented on his silky soft hair and baby soft skin. He had a love for music and would always perk up at Taylor Swift’s “Shake It Off”. He loved watching Disney movies, and you could often find him laying on his boppy watching Frozen or Moana. Buzz lighyear became his thing, and his family called themselves Ramie’s Rangers. He would face many hospital visits and even more seizures, but he never let that stop him. He brought a light and spirit into the lives of his family that can never be replaced. He taught us so much about faith, strength, and love all in the span of five years. Despite his many challenges, his spirit never stopped shining. He had a way of bringing people together and filling a room with his larger than life spirit. When you were having a bad day, holding him made everything better. Although his time here was short, we cherished every day we were blessed to have him. He will be greatly missed but we have peace knowing his body is whole and he is running in heaven, waiting for us to be reunited with him. He is survived by his parents, Landon and Megan, his two little brothers, Riggs and Rylan, grandparents, Tom and Paula Murray, Richard and Paulette Allred, many aunts, uncles, cousins, and many other extended family. A special shoutout to his aunt Sage, grandma Paula, and grandma Paulette for taking such good care of Ramie and being his people. The family would like to extend a special thanks to all those who have helped Ramie and provided support to us in these past five years. To the many specialists that became friends to the hospice nurses that provided love and support to us and Ramie at the end of his life, we thank you. We were blessed to become part of a special tribe of KCNT1 and MMPSI families, meeting others walking the same journey. Keep fighting the fight warriors. To infinity and beyond Mini Bug. In lieu of flowers we ask that the money is donated to the KCNT1 Epilepsy Foundation, https://kcnt1epilepsy.org/ in honor of Ramie. A celebration of life will be held Friday, February 11, 2022 from 10 AM – noon at 16 S Main St. Lewiston, UT 84320. Ramie lived in comfy clothes, so come to the celebration of life in your comfy clothes, sweatpants welcomed. There will be rooms to change into nicer clothes for his graveside service which will be at 12:30 PM at the Lewiston Cemetery. The graveside service will be livestreamed, and if you aren’t able to watch it live, it will be available to watch later. Graveside Zoom livestream link (password: Ramie): https://us02web.zoom.us/j/82699441095?pwd=RHdOUXR3T01wWnpqK0Noam5XQnNDQT09 Arrangements are under the direction of Allen Mortuaries. Thoughts and condolences may be expressed online at www.allenmortuaries.com.

Ramie James Murray, 5, passed away peacefully in his home on February 5, 2022. He was born January 21, 2017 in Logan, Utah to Landon and Megan Murray. From the very start Ramie did things on his own time, starting out by crashing his own baby... View Obituary & Service Information

Ramie James Murray, 5, passed away peacefully in his home on...

Send flowers to the Murray family.