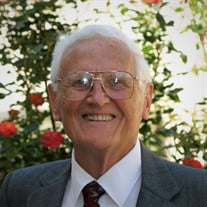 Reid passed away peacefully Sunday morning, March 29, 2020. He was the son of Delbert Lorin Rice and Mary Blotter Rice, born as the New Year’s Baby on Jan. 1, 1924. He grew up in Logan, Utah, graduating from Logan High School. He loved his country and served well. He was an Air Force Pilot during World War II, stationed at Fort Bragg, North Carolina. It was there he met Julia Thompson. They were married in 1945. She was his sweetheart from the day they fell in love until the day he died. After returning, he went to Utah State University and graduated with a degree in mechanical engineering. He spent most of his career working at Thiokol in the space program. Reid and Julia had one daughter, Lucinda (Cindy) Rice Anderson and one son, Scott Lorin Rice. Throughout his life he set an example of hard work. Whatever responsibility he had was accepted and given his full attention. Everyone knew they could count on Reid! His family was his treasure. He loved them dearly. He had not only a great impact on his two children’s lives, but also on his grandchildren’s lives. Throughout his life, he remained a committed, active member of the Church of Jesus Christ of Latter-Day Saints, faithfully serving in many callings and Bishoprics. He left us with a remarkable legacy and example of a life well lived, filled with service, sacrifice, love, and faith and patriotism. It is now our responsibility to follow in his footsteps and emulate his example throughout our lives. He is survived by his dear wife, Julia and children, Cindy (David) Anderson and Scott (Beverly) Rice. He is also survived by his only sibling, Dixie Marie (Lee) Bradley and her two children, Terry (Careen) Bradley, and Dixie Le Bradley. He has eight grandchildren, Kurt (Misty) Anderson, Kelly (Deric) Henderson, Jacob (Stephanie) Anderson, Jenne (Christopher) Stanton, Robert (Stephanie) Anderson, Brooklyn (Matthew) Clark, Taylor (Amy) Rice and Lauren Rice. He has nineteen great grandchildren with one more on the way. He was preceded in death by his parents. A private family graveside service will not be held at this time, due to the current circumstances. A Celebration of his life will be held in his honor sometime in the future. Final arrangements are under the direction of Allen-Hall Mortuary. Condolences may be expressed online at www.allenmortuaries.net Graveside services will be streamed live at the following link at 1:00 PM on Wednesday, April 8, 2020: https://us04web.zoom.us/j/558000975

Reid passed away peacefully Sunday morning, March 29, 2020. He was the son of Delbert Lorin Rice and Mary Blotter Rice, born as the New Year&#8217;s Baby on Jan. 1, 1924. He grew up in Logan, Utah, graduating from Logan High School. He loved... View Obituary & Service Information

The family of Reid Lorin Rice created this Life Tributes page to make it easy to share your memories.

Send flowers to the Rice family.