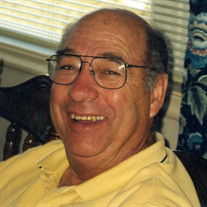 Our family had its Good Friday miracle: Shortly after a Priesthood blessing, Richard Olsen Eames, 83, passed away at Logan Regional Hospital in the evening of April 10, 2020. He is, most of all, a teacher. He taught fifth and sixth grades. He taught the Gospel Doctrine class. He taught us how to work. He taught us how to back up by looking out your side rear view mirror. He was a first baseman for AutoCare softball team. He played on the Logan Eighteenth Ward M-Men basketball team. He refereed Church and municipal basketball games and umpired baseball games. He was an LDS missionary in Western Canada. He served in the U.S. Army at Fort MacArthur in San Pedro, California. He learned how to be a butcher at Temple Grocery on the corner of 300 North and 300 East in Logan. He was a truck driver and could precisely back a ten-wheeler and a pup up to a lay down machine. He was a volunteer usher at the Ellen Eccles Theatre and for the 2002 Olympics. For Family Home Evening at Legacy House last Christmas, he sang “Willy Claus” with a little choir he put together. He owned a red jeep, a blue jeep, a white jeep, and a Volkswagen Bug. He took us to the top of Mt. Logan and to the top of Willard Peak and everywhere in between. He loved his Grandpa Olsen’s Blue Creek farm, Yellowstone, ice skating, the Dodgers, Maddox and Angie’s, the Bar J Wranglers, Phase Ten, John Wayne movies, fishing, hunting, golf, dogs, teaching school, and playing Bingo at Legacy House. He always had in his pocket a white handkerchief, a Swiss pocket knife, a $2 bill, and finger nail clippers. He was born to Edward Henry and June Olsen Eames on March 12, 1937, in Logan, Utah. He married Sharell Baird on September 21, 1961, in the Logan Temple. He lived in Providence for 48 years and will be buried in the Providence Cemetery. He is survived by his wife, Sharell Eames, Providence; his daughter and son-in-law, Karen and Jamie Johnson, Gilbert, Arizona; his son and daughter-in-law, David and Heather Eames, River Heights; his grandchildren: Amanda and Matt Ralphs and their children, Cache Valley; Stefani and Erik Smith, River Heights; Zackary Eames, River Heights; Abby Eames, serving as a nanny in Reading, Pennsylvania; his sister and brother-in-law, Loretta and Sherm Mullins, Twin Falls, Idaho; his Eames sisters-in-law: Sandy Eames, Millville; Joan and Arden Draney, Providence; his Eames nieces and nephew, Randy and Tamera Eames, Amalga; Debbie and Bret Liechty, Providence; Shelly and Mitch Hedin, Logan; his Baird in-laws: Charlene and Mark Austin, Centerville; Jennifer and Larry McCracken, Provo; Dennis and Pam Baird, Brigham City; Janet and Mike Smith, South Jordan. His son, Michael Joseph, passed away in 2010. His brother, Emerson, and his brother-in-law, Theron Baird also preceded him in death. We are grateful for many wonderful providers who cared for him at Logan Regional Hospital and, for the past two years, at Legacy House Assisted Living. A family Graveside will take place Friday, April 17th at the Providence City Cemetery. Funeral arrangements are under the direction of Allen-Hall Mortuary.

Our family had its Good Friday miracle: Shortly after a Priesthood blessing, Richard Olsen Eames, 83, passed away at Logan Regional Hospital in the evening of April 10, 2020. He is, most of all, a teacher. He taught fifth and sixth grades.... View Obituary & Service Information

The family of Richard Olsen Eames created this Life Tributes page to make it easy to share your memories.

Our family had its Good Friday miracle: Shortly after a Priesthood...

Send flowers to the Eames family.