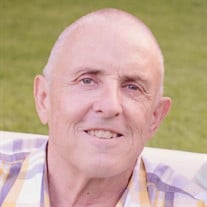 Richard Joseph Moysh, known to many as “Big Rick” or “Coach Moysh”, passed away on December 26, 2020. Rick passed away after a 7 year battle with multiple myeloma (Bone Marrow Cancer). Rick was born on August 3, 1948 in Roosevelt, Utah to Joseph and Gertrude Moysh. At a young age, his parents moved them to Highlands, California where they lived until he graduated from high school. The summers throughout his teenage years were spent with his extended family in Roosevelt. He would recall the many, many memories that he had with all his aunts, uncles, cousins, and best friend Carlos Reed. He had a very deep love for the Uintah Mountains and had his secret fishing hole that he would frequent as often as he could. The hardest thing during his battle with cancer - was that his heart was ALWAY willing to be there at the fishing hole, but his body just wasn’t able to withstand the trip or elements. Rick was an exceptional athlete. He played any sport that he could and learned some of his greatest life lessons through the teams that he played on. He was then able to instill those lessons into the many, many kids that he coached throughout his life. After high school, Rick attended Ricks College (Now BYU-Idaho) to play football where he met his sweetheart Janet Wren and then together, they transferred to BYU. He was also in the Army, stationed at Fort Hood in Texas right after they were married. Eventually, they moved back to Blackfoot, Idaho; where Janet was from, and this is where they raised their five children in a home that they built together. Some of Rick’s favorite past times were fly-fishing, softball, coaching, camping, and family. He had a very, very deep love for family. He was adamant that we continue Moysh family reunions with ALL the extended family we could get ahold of. They were some of his treasures. Thankfully, these are some principles that he has passed on to some of his children and we will be forever grateful. His last moments were spent with his family around him during his MOST favorite time of year. His grandchildren gathered to sing carols to him at his bedside, as he was able to be home on Hospice. He was able to hang on to the early hours of his 50th Wedding Anniversary before he took his last breaths. He is preceded in death by his parents, Joseph Perry Moysh and Gertrude Page Moysh, a little brother, Stacey Moysh, a grand-daughter, Maggie Paige Moysh, and many grandparents, aunts, uncles, and cousins that were there to welcome him with open arms. He is survived by his sweetheart, Janet Marie Wren Moysh, and five children. Kelly (Aydre) Moysh, Andy (Heather) Moysh, Nikki Moysh, Christy (Ben) Madsen, and Jami (Andrey Razuveyev) Moysh. He and Janet were blessed with 16 beautiful grandchildren that they loved to be around. He is also survived by a sister, Tamara (Boyd) Clark and a sister-in-law, Janie Labrum Moysh, and a man who will forever be considered a son to my parents - Mark (Laura) Gabrylczck, and his VERY best man, Buddy Lee Eames and all the nieces and nephews that held a very special place in his heart. Due to current world health conditions, we will not be having a funeral. We will have a private celebration of his life next summer. His final resting place will be in Blackfoot, Idaho. We would like to thank all those who have reached out with kind words, prayers, and love. In lieu of flowers, please donate to a charity of your choosing, or buy a Field and Stream magazine in honor of Rick. Our deepest thank-you will never be enough.

The family of Richard Joseph Moysh created this Life Tributes page to make it easy to share your memories.

Richard Joseph Moysh, known to many as “Big Rick” or “Coach Moysh”,...

Send flowers to the Moysh family.