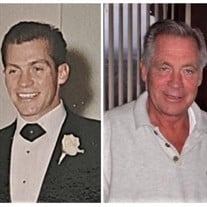 Robert Lynn Miller, born March 9, 1943, to Lynn Reed Miller and Emma Wimmer Miller, passed away peacefully at the age of 78 on Saturday, November 27, 2021. Bob grew up in Hyrum, Utah, alongside his sister and four brothers and graduated from South Cache High School. He married Gae Darley in 1967 and, together, they had two children, Tyler and Marnie. Although he later divorced, he would boast that the greatest accomplishments in his life were his children. Bob grew up working in his family’s business, E.A. Miller & Sons, in Hyrum. There he worked alongside his brothers for most of his life, beginning at an early age in the cattle and meat processing plant and later in sales and marketing – a role which, for many years, had him frequently traveling around the country representing and selling the E.A. Miller brand. Later in life he started Cache Valley Doors, which he owned and operated for over a decade, providing garage doors and equipment to many homes and businesses in and around the valley. As a Hyrum native, Bob loved Cache Valley. He was an avid water skier, and each summer for many years his boat was a fixture on Hyrum Dam, where he spent much of his spare time with friends and family. He was a lifelong member of the Logan Golf & Country Club and enjoyed many hours on the course. During the winter months, Bob enjoyed snow skiing at Beaver Mountain with his son and daughter. Bob also loved Bear Lake, where he eventually built a cabin and, in his later years, spent more and more of his time there during the summer. Bob was preceded in death by his parents, Lynn and Emma Miller, and his sister, Linda Miller; and he is survived by his two children, Tyler (Jeanette) Miller and Marnie (Shane) Farrell; three grandchildren, Hannah Farrell, Abbie Farrell, and Rhys Miller; and four brothers Scott Miller, John Miller, Bruce Miller, and Ted Miller. The family would also like to express their sincere appreciation to the owners and staff of PeachTree Assisted Living, who helped take wonderful care of Bob the last two years of his life. A celebratory memorial will be held at Allen-Hall Mortuary (34 E Center St in Logan) on Wednesday, December 1, beginning at 6:30 p.m. and concluding at 7:30 p.m. with a final toast to commemorate the life of this outgoing and beloved father, grandfather, brother, and friend. Bob will be laid to rest the following day in the Hyrum City Cemetery at a graveside service with his immediate family.

Robert Lynn Miller, born March 9, 1943, to Lynn Reed Miller and Emma Wimmer Miller, passed away peacefully at the age of 78 on Saturday, November 27, 2021. Bob grew up in Hyrum, Utah, alongside his sister and four brothers and graduated from... View Obituary & Service Information

The family of Robert "Bob" Lynn Miller created this Life Tributes page to make it easy to share your memories.

Send flowers to the Miller family.