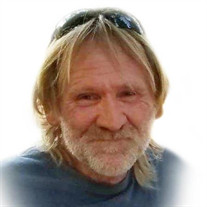 Our loving husband, father, and grandfather Robert George Wilson lost his battle with cancer surrounded by his loving family on December 14, 2021. Bob was born to George Frederick Wilson and Betty Lee Martin in Colorado Springs, Colorado. When Bob was 1 year old his family moved to Missoula, Montana where he spent many fun times hunting and fishing the Montana wilderness. When Bob was ready for a change he moved to Hyrum, Utah with his mother and stepdad. He met his wife Christine Casteel when him and his stepdad went to her parent's house to meet up with her brother Steven to plan a deer hunting camping trip. Hunting was a big family activity for her family. Bob always said it was love at first sight, Christine felt the same way. They were married July 22, 1981 on Bob's birthday. He stated that Christine was the best birthday present he could ever get. Bob enjoyed camping, hunting, fishing, and doing fun activities with his family. Snowmobiling and taking the kids sledding was also one of his favorite things to do. He loved to joke around with people and tell lots of stories. Bob had many friends, and they all held a special place in his heart. He was always kind and was willing to help anyone out that needed his help. He was blessed with four children. Brandon Wilson, Justin (Trista) Wilson, Andrew (Fiance Genny) Wilson, Holly (Jeremy) Baird. Nine Grandchildren - Dawson, Haileigh, Brooklyn, Jaxson, Jacob, Jaden, Allie, K.C, and his angel granddaughter Faith. His sister Sara (Vindy) Wilson, Brother Jon Peterson, Sister Mary Hiatt, Sister Judy Foley, And many brother and sister in laws, Nieces and nephews. He was proceeded in death by his father George Wilson, mother Betty Martin, father in law Stan Casteel, mother in law Virginia Casteel, His granddaughter Faith Renee Wilson, a brother Richard Peterson, sister Nancy Wimmer, brother in law Steven Casteel, sister in law Debbie Larsen, his grandparents and many aunts and uncles. A visitation will be held on December 22rd, 2021 from 6-8pm at Allen-Hall Mortuary, 34 East Center Street in Logan Utah. A celebration of life will be on December 23rd, 2021 at 12:00 pm in the same location. Condolences may be expressed online at www.allenmortuaries.net

The family of Robert (Bob) George Wilson created this Life Tributes page to make it easy to share your memories.

Send flowers to the Wilson family.