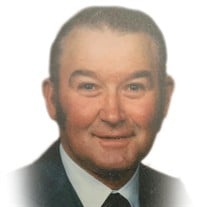 Graveside services may be live streamed via the following link: https://vimeo.com/421179011 Robert Syme Hoffman, 85 of Benson, Utah, passed away the morning of May 14, 2020. He was born July 15, 1934 in Rock Springs, Wyoming, the third child of Albert Alton and Louise Syme Hoffman. Robert grew up in Benson and spent his childhood working on the family farm. He graduated from North Cache High in 1952. He was an active member of The Church of Jesus Christ of Latter-day Saints and served in different capacities including 2nd Counselor in the Ward Young Men’s Presidency. Robert married Roberta Stevens on June 10, 1955 in the Logan LDS Temple. They were blessed with six children: Vickie Sue, Steven Robert, Lyle Kay, Jack Darrell, Ronald Hugh, and Alan Todd. Robert farmed all his life and was a hard worker. He was an active member in the community working as a 4-H leader, baseball coach, and was active in the Farm Bureau for many years. He loved to have fun, spending his free time hunting, snowmobiling, and 4wheeling with family and friends. In later years he was most often seen riding his 4wheeler with one of his faithful Golden Retrievers at his side. Robert is survived by his loving wife Roberta, 5 children: Vickie (Ken) Nye, Lyle, Jack (Sheila), Ron (Lori), and Todd (Tammy); 18 grandchildren and 34 great grandchildren. He is also survived by his sisters Trudie Downs, Carol Ricks (Jerry) Harrison, sister-in-law Peggy Hoffman, as well as numerous nephews and nieces. He was preceded in death by his parents, his son Steve, brother Alton, brothers-in-law Lynn Ricks, Ralph Downs, and a nephew Dee Ricks. Graveside services will be Thursday, May 21, 2020 at 12:00pm. Interment will be in Logan City Cemetery. Condolences may be offered to the family online at www.allenmortuaries.net. “We love you past the moon and miss you beyond the stars.” Condolences may be expressed online at www.allenmortuaries.net

Graveside services may be live streamed via the following link: https://vimeo.com/421179011 Robert Syme Hoffman, 85 of Benson, Utah, passed away the morning of May 14, 2020. He was born July 15, 1934 in Rock Springs, Wyoming, the third child... View Obituary & Service Information

The family of Robert Syme Hoffman created this Life Tributes page to make it easy to share your memories.

Graveside services may be live streamed via the following link:
https://vimeo.com/421179011...

Send flowers to the Hoffman family.