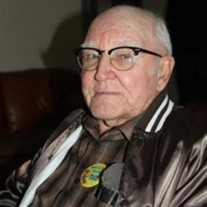 Just like this great country that he loves, Robert “Bob” Norman Radtke came from very inauspicious beginnings and with much effort and determination was successful throughout his life. A self-made, honest, kind, and dependable man, Bob was born in the little mining town Eureka, Utah on 11/22/1925 to Vivian Charlotte Whitehead Radtke and Gottfried “Fred” Jacob Radtke - (who passed away when Bob was only 14). He was second of 4 children: Fred Jr, Bob, Paul Eugene (who passed when only 4 years old) and sister Charlotte. When his mother remarried, Bob accepted and developed a mutually rewarding life-long relationship with his stepfather Earl Stewart. Bob worked hard at a variety of jobs to help support his mother and family; delivering papers before school, helping at the local grocery store (delivering groceries to folks before he even had a driver’s license!) working on the railroad and other various jobs. He attended and graduated from Tintic High School in Eureka. Bob enlisted in the Navy when he was 18 years old. While in the Navy, he met his future wife on a blind date which had been set up by a long-time friend. He was smitten! It did take a while, and more than one proposal, before Ida accepted. Bob and Ida Louise Fowkes were married Feb. 23, 1953, in Los Angeles, California. They were sealed in the Manti Temple June 16, 1964. Bob and Ida have three children: Wendy Lu (Eric Coombs), Robert Norman Jr (Joan Suzanne Williams), and Elin Jeanne (Matthew David Archibald). Bob and Ida have 9 grandchildren and 15 great-grandchildren, and he was able to participate in the blessing of his youngest great granddaughter just a little more than a month ago! Bob had joined the Navy and became a pilot. He rose through the ranks and retired as a Commander after 28 years. He was deployed three times on the aircraft carrier US Coral Sea (CVA 43). In 1964 Bob was transferred to Corpus Christi, Texas for three years to become the (VT 27) Air Flight Training Squadron Commander. Bob was then transferred to London, England for 2 years. He worked in downtown London with Staff CINCUSNAVEUR at the US Embassy. Bob retired from the Navy and the family moved to Logan in 1969 where his youngest child, Elin, was born. He went to school at Utah State University and got his Master’s Degree in Education. He then taught math at Box Elder High School for 18 years. Bob was a very active man. He enjoyed snow-skiing (always wearing his hunter-orange hat!), golfing, bowling, water-skiing, fishing and hunting, horse-riding and Bob found great satisfaction farming. Bob also loved comparing notes on sudoku puzzles with family members (he was determined to keep his mind sharp) and loved the challenges of playing Rumikub with family. Then there was the Jazz! If their coach had ever needed a day off, Bob, who practiced regularly with each closely watched game, would have been more than happy and ready to continue coach the team to help them better handle their game! Bob had planned to get into Real Estate after retiring from teaching, but his plans and life were dramatically altered because of a snowmobile accident at Peter Sinks in Logan Canyon in 1994. He was life-flighted to Logan Hospital for a broken back and from there transported to Salt Lake City. Despite originally being paralyzed below the waist, over time and with determination, hard work and physical therapy, he was again able to walk with a crutch and a cane, and to even drive! Bob’s relationship with our Heavenly Father was central to him. He was a devoted disciple and served in the Church of Jesus Christ of Latter-day Saints in many leadership capacities. He faithfully served as a temple worker in the Logan Temple for many years, primarily at the Recommend Desk. He also accepted the calling of being a missionary in the Family History Center, where he enjoyed serving patrons for many years. Bob loved doing his own Family History and was excited about those for whom he opened the doors to Eternity. While it was a difficult challenge to move from being a helper to the helped, and as his overall condition continued to decline, Bob was very gracious. He never complained about his new and over time increasing limitations, nor the “injustices” of his circumstances. He was the epitome of patiently waiting on the Lord and His timing. The last few years of his life were the most difficult. Bob was always such an independent, self-reliant person; but now he needed help in a lot of ways. He became more and more dependent on those who made a huge difference especially in the last of his life with their compassionate assistance, such as: family and friends, many doctors: Dr James Mathews, Dr Brett Porter, his Oncologist Dr S, PA Teryl Hunsaker, Nurse Practitioner: Jacob Sanderson, the many professional people such as the nurses, technicians, therapists, home health care people, other support people (like the nearby EMT’s from the nearby fire station with whom he also had become well acquainted!) We especially want to thank the staff at Maple Springs who made Bob’s life do-able during his stay. We thank you all! Bob and his family would want them to know how much he, and we, appreciate all they have done for him!! For about the last 8 years Bob has been waiting and looking forward to joining Ida and again “going on a date.” On March 13, with family around him, he quietly walked through that door we will all pass through, going home and joining Ida and the rest of our Eternal Family. All is well. Services will be held Saturday March 26, 2022 at 12 Noon at the Hillcrest 1st Ward Chapel, 875 N 1500 E, Logan, Utah. A viewing will be held the evening prior at Allen Hall Mortuary 34 E. Center St. Logan, Utah from 6-8pm. Graveside service will follow at the Logan city cemetery at 1:30 pm

Just like this great country that he loves, Robert &#8220;Bob&#8221; Norman Radtke came from very inauspicious beginnings and with much effort and determination was successful throughout his life. A self-made, honest, kind, and dependable... View Obituary & Service Information

The family of Robert Norman Radtke created this Life Tributes page to make it easy to share your memories.

Just like this great country that he loves, Robert “Bob” Norman...

Send flowers to the Radtke family.