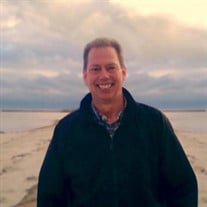 Robert Warren Tew, devoted son, brother, uncle and friend passed away on August 13, 2021, following a prolonged illness. Rob was born on September 16, 1963 in Logan Utah. He was the youngest of ﬁve children born to Orson and Afton Tew. As a small child, Rob lived with his family in LaPaz, Bolivia for 3 years during his father’s USAID employment, where Rob learned to speak Spanish ﬂuently. He enjoyed playing with the family’s pet llama and parrot, which began a tender lifetime friendship with the animals he later often chose as companions. Upon the family’s return from Bolivia, Rob was raised in North Logan. At the age of 10, Rob lost his father to cancer, a loss he felt deeply throughout his life. Rob helped his mother care for their big yard, garden and family apple orchard. He graduated from Sky View High School and was active in student government, serving as Senior Class President. Rob enjoyed participating in school preforming groups, and had leading roles in school plays and musicals. Rob served an LDS mission to Colombia and loved working with the people and using the Spanish he had learned as a child. He studied at Utah State University, often sharing his beautiful baritone voice as a soloist and in small groups. He particularly valued the opportunity to sing and travel with the USU Sunburst Singers. Rob was an accomplished drummer and percussionist. Rob was an Eagle Scout, inducted into the Order of the Arrow and participated with them for many years. He had a deep appreciation for nature and could often be found hiking, camping, and riding his motorcycle to explore the world around him. Throughout his life, Rob had the opportunity to travel extensively and developed a connection with people from diﬀerent backgrounds and cultures. Rob was a collector of interesting items and was generous to show and share them with others. California was Rob’s home for many years during his career as a businessman. However, he always looked forward to returning to his home in North Logan to visit and is where he eventually retired. Rob is survived by his siblings Roger (Paula) Tew, Risa Jorgensen, Rochelle (Doug) Reid, and Ryan (Pam) Tew, as well as many nieces and nephews who adored him. Rob is preceded in death by his father, mother, brother-in-law Bruce Jorgensen and his nieces Jeanna Reid and Marissa Tew. Funeral services will be held Saturday August 21, 2021 at 11:00 am in the North Logan 16th Ward chapel located at 1550 East 1900 North, North Logan Utah. The family will greet visitors from 10:00 to 10:45 am. Interment will be at the North Logan Memorial Cemetery following the services. Services will be livestreamed and can be accessed through the following link: https://us02web.zoom.us/j/81794176551?pwd=VEtORGgrcFdUM1puRk4rNmkvNTJDQT09 Password: Tew

Robert Warren Tew, devoted son, brother, uncle and friend passed away on August 13, 2021, following a prolonged illness. Rob was born on September 16, 1963 in Logan Utah. He was the youngest of &#64257;ve children born to Orson and Afton Tew.... View Obituary & Service Information

The family of Robert Warren Tew created this Life Tributes page to make it easy to share your memories.

Send flowers to the Tew family.