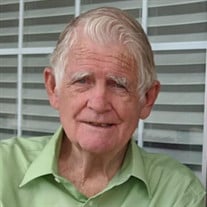 Ronald C. Harker, 87, died February 21, 2022, in Mendon, UT. He was born March 17, 1934, to Wayne Harker and Docia Mae Dial in Shelley, Idaho, home to Ron’s early childhood. His family moved to Idaho Falls in 1944. He graduated from Idaho Falls High School, began a machinist apprenticeship, and served as heavy equipment instructor in the U.S. Army during the Korean War. After being discharged he returned to the machinist trade at the Naval Ordnance Plant. He then continued his education in mathematics and English at BYU. He retired from INL as a Health Physicist, thereafter, working as a nuclear industry consultant. Ron served in many capacities in the Church of Jesus Christ of Latter-day Saints and contributed to projects for the Sons of the Utah Pioneers. On April 2, 1953, he married his childhood sweetheart, Joyce Ruth Heileson, in the Idaho Falls Temple, and seven children eventually joined the family. Ron is survived by his wife, Joyce; sister, Tess Nelson; sister-in-law, Verla Harker; and children, Steve (Jewel) Harker, Susan (Joel) Cleverley, Robert (Susan) Harker, John (Brenda) Harker, Paul (Eileen) Harker, Alan (Kim) Harker, and Thomas Harker. His posterity numbers 30 grandchildren and 35 great-grandchildren. Ron was preceded in death by his parents, Wayne and Docia Harker; brother, Dale W. Harker; sister, Betty Mae Harker; and granddaughter, Camille Cleverley. Funeral services will be held on Saturday, March 5, 2022 at 12:00 pm in the church Osgood Church located at 7940 N 35th W. Idaho Falls, ID with a viewing beginning at 10:00 am. Interment will be in the Hillcrest Shelley Idaho Cemetery. with military honors Funeral arrangements by Allen-Hall Mortuary, Logan. Condolences and memories may be shared online at www.allenmortuaries.com The funeral will be livestreamed and can be accessed by clicking on the following link: https://us02web.zoom.us/j/88221762940?pwd=TEREd3JtcEZlMkVoMkhWb2hLZG1CZz09 (password: Harker)

Send flowers to the Harker family.