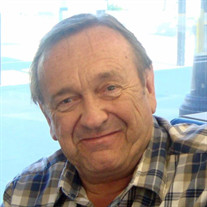 On September 5, 2021, Ronald S. Hofler, beloved husband and father of five, passed away at his home at the age of 71, surrounded by his family after several years of battling a series of infections. Ron was born on July 11, 1950, in Logan Utah to Sylvan August Hofler and Villa Stoddard Lloyd Hofler. He was raised an only child. Ron attended Logan City Schools, graduating from Logan High in 1968. Ron attended Utah State University and studied Business. Ron first met his sweetheart, Gloria, at the Mendon Church where he told his friends, “I’m going to marry that girl one day”. Gloria waited for Ron while he served a two-year mission for The Church of Jesus Christ of Latter-Day Saints in Sao Paulo, Brazil. Ron returned and married his best friend and sweetheart, Gloria Richards on January 5, 1972, in the Logan Temple. They would have celebrated 50 years of marriage this coming January 2022. Ron worked as a salesman for JC Penney and Moore Business Forms early in his career. He enjoyed working for ERA and RVA Realtors selling real estate. Ron later went onto work for the United States Postal Service as a Letter Carrier in Logan and North Logan for 25 years until his health forced him to retire in 2011. Ron was an active member of the Church of Jesus Christ of Latter-Day Saints. He enjoyed serving others in the many leadership positions he held and most enjoyed serving in the Bishopric in the USU Singles Wards. Ron loved people and seemed to know someone everywhere he went. Ron’s quick wit and his sense of humor was one of the many reasons people wanted to be around him. He was always willing to take the time to listen and give advice to his family, no matter the hour or how busy he was. Ron’s children and grandchildren loved to tease him and laugh with him, he could find humor in about anything. Even in his final days, he still found occasions to laugh and make jokes and bring a smile to his family. These moments will be missed the most. Ron is survived by his wife, Gloria Richards Hofler; his children, Jennifer (Kirk) Taylor, Scott (Konnie) Hofler, Angela (Zon) Hagman, Michael (Laura Christensen) Hofler, and Erin (Jacob) May; 21 grandchildren; brother-in-law, Lynn (Dawn) Richards; sister-in-law, Deanne Flandro. He was preceded in death by his parents, Sylvan & Villa Hofler. The family would like to express gratitude to Hospice, for their exceptional care they provided to him, friends and family who filled his last days with visits and phone calls; he loved the visits. Most of all, to his devoted, loving wife, for the full-time care she has given him over the last several years. What an angel. Funeral services will be held on Wednesday, September 8th, at 12:00 noon, at the Mendon Church, 100 West Center, Mendon. A viewing will be held on Tuesday, September 7th at Allen Hall Mortuary from 6-8 pm; and prior to the service on Wednesday, September 8th from 10:00-11:30 at the church. Burial will be in the Mendon Cemetery. Condolences and memories may be shared online and a broadcast of the funeral (ZOOM) will be available via the following link: https://us02web.zoom.us/j/89342457409?pwd=bXUyK29lUm05ZFJUN2pUQnhJSzB3QT09 Password: Hofler

On September 5, 2021, Ronald S. Hofler, beloved husband and father of five, passed away at his home at the age of 71, surrounded by his family after several years of battling a series of infections. Ron was born on July 11, 1950, in Logan... View Obituary & Service Information

Send flowers to the Hofler family.