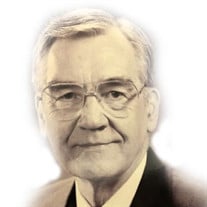 Ronald Dean Plowman, age 91, passed away peacefully on Feb. 6, 2020. He was born August 25, 1928, in Smithfield, Utah, to Ronald O. and C. LaRue Bankhead Plowman. He married Kathleen Simmons on Jan. 12, 1951, in the Logan, Utah, LDS Temple. Dean was a devoted husband, father, grandfather, and member of the Church of Jesus Christ of Latter-day Saints. Dean grew up on a dairy farm in Smithfield, Utah. He attended North Cache High School, then joined the U.S. Army in 1946, went to Japan with the occupation forces and was out and at Utah State by 1948 courtesy of the GI Bill. He later said, “I went to school (USU) by default. There wasn’t enough farm to support all the boys.” He decided to go to the University of Minnesota to get a master’s degree so he could become the Utah State Extension dairy specialist, but while there discovered he was just as smart as the other guys and decided to get a Ph.D. in Dairy Cow Breeding (Genetics). That degree led to a career at the U.S. Department of Agriculture’s Agricultural Research Service (ARS). Dean, Kathy and two young sons moved to Maryland in 1957 for Dean’s work at the Beltsville Research Farm, where his focus was to improve milk production in dairy cows through selective breeding. In 1972 he was transferred to the Logan, Utah ARS office, in administration. After retirement from ARS he was appointed head of USU’s Department of Animal, Dairy and Veterinary Sciences. In 1988, he was recruited back to the ARS as its director and eventually served as the Assistant Undersecretary of Agriculture for Science and Education until 1995. Dean was an avid fisherman, horseman, hunter, skier and gardener much of his life and deliverer of Meals on Wheels after he retired. He had many local “buddies” in these activities and participated with them through last summer. He insisted on cooking pit turkeys for Thanksgiving and pressing apples for juice from his trees until just last year as well. He served faithfully in many Church callings including bishopric counselor, bishop, high councilor, Sunday School President, and in the temple throughout his life. Dean forged strong relationships with his children, in-laws, and grandchildren. He loved to camp and hike as family activities. He was an ardent supporter of concerts and performances. After Mom passed in 2000, he graciously assumed many of her roles in the family. Dad’s heritage includes a link to Cache Valley’s history of a predominantly agrarian lifestyle and the values of hard work. His children hope to imbue that great example in their posterity. He is survived by his brother John, and children Kenneth (Suzanne) of Highland, Utah; Stephen (Sheri) of Medina, Wash.; Maurine (Glen) Watkins of Salt Lake City, Utah; Douglas (Heather) of Logan, Utah; and Anne (Brad) Nelson of Layton, Utah; 22 grandchildren and 30 great-grandchildren. He was preceded in death by his wife, parents, sister Renee’; two granddaughters; and one great-grandson. . Friends and relatives may call from 10:30 a.m. to 12:30 p.m. Saturday, February 15, 2020, to visit with the family at the North Logan First Ward Church, 1105 East 2100 North, North Logan. Funeral services will follow at 1:00 p.m. Interment will be in the Smithfield City Cemetery immediately following the service. Condolences and thoughts may be shared with the family online at www.allenmorotuaries.net

The family of Ronald Dean Plowman created this Life Tributes page to make it easy to share your memories.

Send flowers to the Plowman family.