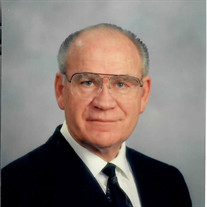 Rondo A Christensen of River Heights, Utah passed away September 16, 2020 at the age of 90. He was born in Oasis, Utah on July 18, 1930, and was the son of Alma and Sylvia Christensen. He was the 6th child in a family of seven sons and one daughter. He was the last living member of his family. He spent his early years milking and herding cows, pitching hay and doing chores on the family farm. He went to college at the BAC branch of Utah State University in Cedar City. While there he met and courted Jeannine Lunt. They both graduated with associate degrees in 1950. Rondo then served a 2 year mission for the Church of Jesus Christ of Latter-day Saints in North Carolina and Virginia. Rondo and Jeannine were married in the St. George temple on December 27, 1952. They welcomed four children into their family. Craig (Bonnie) of Centerville, Utah, Eric (Izabel) of Toulouse France, Lisa (Quinn) of Menlo Park California and Lane (Tanjia) of Longmont, Colorado. After graduating from Utah State University in 1954, Rondo, Jeannine and Craig moved to Ithaca New York where Rondo attended Cornell University where he received his masters and PhD degrees. Rondo joined the faculty of Utah State University as a professor of economics and extension and research economist. He retired in 1994 having taught for 37 years. During this time the family lived in Bolivia for 2years on the USU contract with USAID. As an active member of the Church of Jesus Christ of Latter-day Saints, Rondo enjoyed and served faithfully in many callings. He served as a bishop twice (River Heights 1st ward and USU 4th ward), counselor in the Stake Presidency and on the high council (Providence Utah Stake). For 14 years he had the calling to write letters to the missionaries serving from the ward, which brought him great joy. In their retirement years, Rondo and Jeannine served two missions at Temple Square and the Joseph Smith Memorial Building. Rondo and Jeannine enjoyed having a home in St. George, Utah for 19 years where they served in the baptistry of the St. George temple. They also loved golfing and hiking and being near family in the area during their time in St. George. Rondo faced many health challenges during the last 18 months of his life and did so with patience, humility, courage, humor and kindness. He was a great example to us all of not only enduring to the end, but living fully despite what challenges were placed in front of him. The family would like to thank the many doctors, nurses and other caregivers who helped take care of him as well as the wonderful management and other health care workers at Maple Springs. A private family service will be held Saturday, September 26th at 12:00. Extended friends and family are invited to join via the Allen-Hall Mortuary zoom link: https://us02web.zoom.us/j/84151655077 In lieu of flowers, donations may be made to the General Missionary Fund.

Rondo A Christensen of River Heights, Utah passed away September 16, 2020 at the age of 90. He was born in Oasis, Utah on July 18, 1930, and was the son of Alma and Sylvia Christensen. He was the 6th child in a family of seven sons and one... View Obituary & Service Information

Rondo A Christensen of River Heights, Utah passed away September...

Send flowers to the Christensen family.