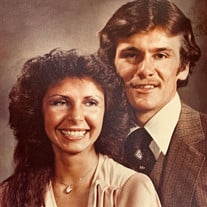 Roxie Bassett, 60, of Providence, Utah passed away from complications of pneumonia having gracefully battled MS for 14 years on Wednesday, February 5th, 2020 in Logan, Utah. She was born on March 5, 1959 in Idaho Falls, Idaho to Gary Richardson and Nancy Kelley. Roxie grew up in Firth, Idaho and attended Firth High School where she was part of the cheer squad as the school mascot. She attended Ricks College obtaining a secretarial certificate after which she moved to Logan, UT and lived with her best friend Michelle Cox and family while working at Hillyard, Low & Anderson. She then met Michael W. Bassett and after a 3 month courtship they were sealed together for time and eternity on July 31, 1979 in the Logan Temple. Nine months and three days later their first son Jesse Beau was born. Tessa, Zachary, and Jake followed in quick succession over the next six years. Roxie enjoyed in the peak of her health coaching softball, being PTA President and Team Mom to her children’s sports teams. She was also known as the Queen of Organization. She and Mike loved to travel and their yearly trips to Lake Powell were some of life’s highlights. Roxie had a strong testimony of Jesus Christ which shined through her relationships with friends, family and those around her. During this difficult time we are comforted by enumerable stories from friends and those who cared for her who often state they have received more blessings in return, than what they gave in caring for Roxie. Roxie is survived by her husband Mike, mother Nancy (Don) Kelley, sister Chrystal Cook, children Jesse (Sophie), Tessa (Adam) Winger, Zachary (Katie), Jake (Kami) and ten grandchildren who were the light of her life. She is preceded in death by her father Gary. A reception will be held Friday, February 14, 2020 from 2 to 4 pm at Allen-Hall Mortuary, 34 East Center in Logan. Memorial services will take place Saturday, February 15, 2020 at the Canyon View ward chapel, 360 East 450 North in Millville, beginning at Noon with a reception prior from 10:30 to 11:45 AM. Interment to immediately follow in the Providence City Cemetery. In lieu of flowers the family has requested donations be made to the MS Society. Condolences may be expressed online at www.allenmortuaries.net

Roxie Bassett, 60, of Providence, Utah passed away from complications of pneumonia having gracefully battled MS for 14 years on Wednesday, February 5th, 2020 in Logan, Utah. She was born on March 5, 1959 in Idaho Falls, Idaho to Gary Richardson... View Obituary & Service Information

Roxie Bassett, 60, of Providence, Utah passed away from complications...