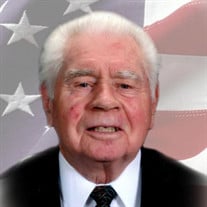 Royal Thair Carver 92 passed away peacefully at his home in Logan, Utah. Born April 19, 1928 in Plain City, Utah to Royal Gilbert Carver and Ivy Tracy Skeen Carver. Thair has three sisters, Ivy June Beesley, Nadine Taggart, and Lora Gaye Bybee. He was, as he told it, the best son his parents had. Thair graduated from Weber High School in 1946. He served a mission for the Church of Jesus Christ of Latter-day Saints to the Central Atlantic States Mission in 1948-1950. Upon returning home from his mission, he married his sweetheart Norma Louise Hull in the Logan LDS Temple on February 8, 1951. Thair and Norma raised five children and, this year they celebrated their 70th wedding anniversary. Thair served on active duty in the US Army, including service in Korea, and continued to serve in the United States Army Reserves in the Veterinary Corps. After 35 years of active and reserve service he retired at the rank of Colonel. He loved this country, and his patriotism was infectious. He felt truly blessed to be a citizen of this great country and was extremely proud of his pioneer heritage. Thair obtained a Bachelor of Science in Animal Husbandry and a Master of Science in Bacteriology from Utah State University and he bled Aggie Blue. He obtained his Doctor of Veterinary Medicine from Washington State University in Pullman, Washington. After working for several years in private practice as a small animal veterinarian, Thair worked for 33 years for the US Department of Agriculture Animal Health Veterinary Services from 1962 until his retirement. Thair was a faithful member of the Church of Jesus Christ of Latter-day Saints all of his life and served in a wide range of callings, including in ward Bishoprics and on the Mount Logan Stake High Council. Following his retirement, he was free to focus on his passion on this earth, missionary work. Norma and he served together in the Kentucky Louisville Mission, at the Saint George Temple and the Salt Lake Temple Square Mission. He would later serve as a docent at the Church History Museum in Salt Lake City. Whether family or friend if you wanted to serve a mission for the church, Thair made sure you had the resources and support to do so. While serving in the Kentucky Louisville Mission he was given the nickname “The Preacher Man” from those he taught, in that tradition, for 21 years, family and friends have received a monthly letter from Thair and Norma, known as “The Preacher Man”, filled with testimony, wisdom and humor. The last “Preacher Man” letter arrived in the mail on March 1, 2021. Thair maintained a steadfast testimony of Jesus Christ and shared his testimony through example and word. He touched many lives for the better and never seemed to forget the name or circumstances of anyone he met. Together Thair and Norma have set a worthy example of what it means to be in the service of your fellowman. If you called for help, no matter where you were, they answered. Thair will be greatly missed. He is preceded in death by his parents, two sisters June and Nadine, and grandsons Brennen Carver and Charles “Otter” Sare. Thair is survived by his wife of 70 years Norma, his sister Gaye Bybee and his children and their spouses - Alan (Shirley) Carver, Ann (Kent) Jones, Jill (Craig) Roberts, Jon (Vikki) Carver, Aaron (Mandy) Carver, - and 21 grandchildren and 41 great-grandchildren. A viewing for family and close friends will be held March 13, 2021 from 9:45 a.m. to 10:45 a.m. followed by Funeral Services at 11:00 a.m. at the Church of Jesus Christ of Latter-day Saints located at 325 Lauralin Dr. Logan, Utah. Masks are required and social distancing is encouraged. Services will be live-streamed and may be viewed via the following link: https://us02web.zoom.us/j/84166299142?pwd=R0w3dXpyeUxrZFZSY2FzQUkxbkVzQT09 Password: Carver In lieu of flowers please consider donating to the church Missionary Fund, the church Humanitarian Aid Fund or perform an act of service for someone in need.

Royal Thair Carver 92 passed away peacefully at his home in Logan,...

Send flowers to the Carver family.