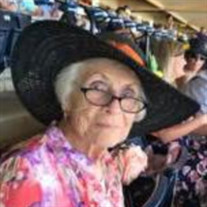 Benson, Utah-Ruthie June Tait AndresThain(92)passed away on February 20, 2021. Ruthie was born on June 10, 1928 in Phoenix, Arizona to David George Tait and Ruth Jackson Tait. She spent her younger years living in Prescott, AZ during the school year and in Globe, AZ on her Grandmother Cora Jackson’s ranch the rest of the time. Ruthie graduated from Prescott High School in 1946. She then went on to the Univ. of Arizona and to nursing school at Hotel Dieu in El Paso, TX. In 1948 she lost both her step-father Frank Trussell and mother in an automobile accident in Phoenix, AZ. In January 1949, Ruthie went back to nursing school at Los Angeles County Hospital, where she met a handsome young medical student, Wilbur (Bill) S. Thain. Bill and Ruthie were married on June 17, 1951 in West Los Angeles at his parents’ house. They were later sealed in the Logan LDS temple. Bill, Ruthie and their 1st born daughter, Karen lived in San Diego for a year while he completed his internship at the Naval Hospital. Bill was called to “board” the U.S. Cavalier; a troop carrier to be station in Japanese waters. Ruthie and Karen returned to West Los Angeles to be near his parents for the year he would be at sea. Their second child, David was born in Santa Monica the following March. On Bill’s return in April of 1954, they moved to Bakersfield. CA. He did a year’s residence at Kern General Hospital. Following his residency the family moved to Logan, Utah to start his medical practice in July of 1955. They added two more children to their family, Susan in 1957 and Paul in 1960. Ruthie was active in the LDS Church, civic programs, PTA, and helped get Sky View finished. She was a member of the hospital Board at Logan Regional for 6 years. She worked in Bill’s office as the nurse. Ruthie is an avid horsewoman and in 1976 Ruthie and Bill built the Rocking-R Arena and Stables on the east bench in North Logan. They lasted 10 years before the recession got the best of them. Giving everything back to the bank, Bill closed his practice and they moved back to California where Bill became a Medical Director and Ruthie worked for a temp agency working in doctors’ offices in Orange County. They moved to Chandler, AZ. for 9 years and then to Carson City, NV. They returned to Cache Valley in 2006 to settle in Benson, next to their daughter Susan and husband Ross Olsen. Bill passed away in April of 2016. Ruthie has continued to live in their home in Benson. Her daughter Karen and Rod Curtis live in College Ward, David and Jari live in Washoe, NV, and Paul and Geishaye live in Hyde Park. She is survived by her daughters Karen (Rod) Curtis of College Ward and Susan (Ross) Olsen of Benson, sons Dr. David (Jari) Thain of Washoe Valley, NV, and Paul (Geishaye) Thain of Hyde Park, eight grandchildren, Ryan, Amy, Lacey, Colton, Ami Jo, Katelin, Kelsie, and Sean and twelve great-grandchildren, Stetson, Chayton, Taylie, Shelbie, Preslie, Lillia, Tait, Justin, Travis, Tayson, Cormick and Kyle. She was preceded in death by her parents, son-in-law Ross Olsen, great-grandchild Kyndlee and adopted son Robert E. Olson of Lafayette, CO. Services are under the direction of Allen-Hall Mortuary. At Ruthie’s request: “Due to that DAMNED Covid 19 virus,” A private service will be held with interment at Providence Cemetery. A life will be scheduled for next summer "after the chaos is finished and the stupidity has subsided!” In lieu of flowers the family requests a gift be given to Rescue Rover Dog Adoptions https://www.rescuerovers.org/donate Services will be livestreamed and may be viewed Thursday, February 25 beginning at 11:30am via the following link: https://us02web.zoom.us/j/88543527865?pwd=SklrVGdTUmR4Z3FLUWovNUtVWDkxUT09 Password: Thain

Benson, Utah-Ruthie June Tait AndresThain(92)passed away on February 20, 2021. Ruthie was born on June 10, 1928 in Phoenix, Arizona to David George Tait and Ruth Jackson Tait. She spent her younger years living in Prescott, AZ during the school... View Obituary & Service Information

The family of Ruthie June Tait Andres Thain created this Life Tributes page to make it easy to share your memories.

Send flowers to the Thain family.