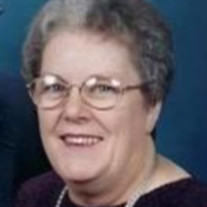 Sally Lou Taylor, 84, of Hyde Park passed away peacefully at home on Thursday, February 25th surrounded by her children and grandchildren. Sally was born October 16, 1936 in Kalamazoo Michigan to Florence A McQuown and Donald Henry Wilson and was the third of four children. She grew up enjoying the lakes around Kalamazoo, family outings and any excuse to be outside. She was an avid softball player and was pitcher for her local team, but enjoyed playing all sports. She also enjoyed hunting, fishing, and hiking. She was part of the local Civil Air Patrol and logged in many flight hours. She married Robert Duane Holtz September 14, 1955 and together they adopted Karen Sue from Korea. This marriage ended after 7 years. Sally believed in working hard. At times she worked multiple jobs to care for her daughter. She enjoyed working at various medical clinics, but her favorite job was as an Administrative Assistant for the Advertising Department at Upjohn Pharmaceuticals. Sally and her daughter Karen moved to California to pursue better employment opportunities in 1967. Her move from Kalamazoo, Michigan to Canoga Park, California proved to be life-altering. She was introduced to the Church of Jesus Christ of Latter-Day Saints by 2 young missionaries she thought were trying to sell her a life insurance policy. She was considered a ‘golden’ contact and was baptized November 1969 and enjoyed her many opportunities to serve in her Ward. Her baptism in the Church soon lead to her finding her eternal mate, Dennison (Denny) Lee Taylor. They were married on July 3, 1970 and their marriage was solemnized in the Los Angeles temple a year later. Sally, Denny, and their daughter Karen moved to Logan in 1971 and enjoyed two years in the 13th Ward then built a home in Hyde Park where they continued to enjoy their lives until their deaths. While building their new home in Hyde Park, Sally and Denny were blessed with a son, Jeremy Paul Taylor. Sally loved the Gospel and loved to spend her time studying and sharing her new knowledge. Her testimony grew as she served in various capacities including: Relief Society presidencies, Young Women’s and Primary. Soon after Denny passed away, she found great peace working as a temple worker. Sally is survived by her daughter, Karen Sue Corrales (Frank) of Port Orford OR; and son Jeremy Paul Taylor (Klarissa) of Hyde Park UT, a sister-in-law, Marjorie Helen Jensen (Jack) of Providence UT; a brother-in-law, Donald Gill Taylor (Joann) of Palmyra NY. She has four living grandchildren: Brian Frank Corrales (Helena) of Salt Lake City UT; Kimberly Sue Bailey (Aaron) of Mesa AZ, Antoni J Taylor of West Haven UT; and Kirsti Anne Taylor of Hyde Park UT. She has eight great-grandchildren: Eli Frank Corrales, Esme Simone Corrales, Elsie Amabel Corrales, Michael (Mikey) Frank Bailey, Daniel (Danny) Aaron Bailey, Benjamin (Benny) Brian Bailey, Rachel Elizabeth Bailey and Raelynn Mae Taylor. Sally is preceded in death by: both parents, Donald Henry and Florence A Wilson; her husband of 38 years Dennison (Denny) Taylor; both sisters, Nancy Woodruff and Claudia Butcher; brother, Donald Grant Wilson; Sisters-in-Law Ruth Cardon, Gwendolyn (Gwen) Wilson; and Brothers-in Law, Duane Woodruff and Phillip Cardon; and one grandson, Brendon Alexander Taylor. Due to ongoing COVID concerns, the family requests that those wishing to attend the funeral services be sure to properly wear a face mask and to honor the physical distancing requirements as outlined by the CDC. The funeral service will be held on Friday, March 5, 2021 at 11:00 am at the Hyde Park Chapel, 33 East Center in Hyde Park. A viewing will be held on Thursday March 4, 2021 from 6 to 8pm at the Allen Mortuary of North Logan, 420 East 1800 North in North Logan and from 10:00 – 10:45am Friday prior to services at the church. Interment will be in the Hyde Park City Cemetery. Services will be livestreamed and may be viewed via the following link: https://us02web.zoom.us/j/85045792076?pwd=dlJzZWYrZEtoUlJDdFVsQldGMzkyUT09 Password: Taylor

Sally Lou Taylor, 84, of Hyde Park passed away peacefully at home on Thursday, February 25th surrounded by her children and grandchildren. Sally was born October 16, 1936 in Kalamazoo Michigan to Florence A McQuown and Donald Henry Wilson... View Obituary & Service Information

Sally Lou Taylor, 84, of Hyde Park passed away peacefully at...

Send flowers to the Taylor family.