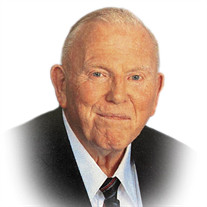 Services will be live streamed beginning at 11:00 AM on Monday, July 6th via the following link: https://us02web.zoom.us/j/89004960689 Samuel Garth Johnson, amazing husband, father, grandfather, great-grandfather, and friend, passed away at the age of 84 in his home in South Jordan, Utah, attended by his loved ones, on Tuesday, June 30, 2020. He was born February 10, 1936, in Preston, Idaho, the oldest son of Samuel Hansen Johnson and Venna Holliday. He married his high school sweetheart, Geraldean Kent on June 2, 1954, in the Logan Temple. They just celebrated their 66th wedding anniversary. Together they raised 5 children, Kent Garth (Janice) Johnson, Steven Ray (Anne) Johnson, Kaylene (Stan) Sullivan, Robert Dean (Charon) Johnson, LeAnne (Mark) Schultz. He was a great example of perseverance and love. At the age of 13 he contracted polio and spent 3 months in the LDS Hospital. He loved to retell the stories of his time there, and how he would take care of the younger patients and tuck all the little ones in at night. This was a pattern in his life. He was always more concerned about others than himself. He graduated from Utah State University with a degree in electrical engineering. After working for Boeing Aerospace in Seattle, Washington, he accepted a position at Hercules Powder Company, later Hercules Aerospace, in 1959, where he worked until his retirement in 1992. Some of the things he enjoyed were playing tennis, raising animals, and serving in the church. In their later years, he and Geraldean served a family history mission together, and they both became enthusiastic about family history and temple work. They loved serving together for many years in the baptistry at the Jordan River Temple and later at the Oquirrh Mountain Temple. He found his greatest joy in continuing to care for Geraldean at home and visiting with his family and friends. Although he thought he had beaten polio many years ago, the lasting effects of post-polio syndrome took their toll on his body, which finally gave out. He is survived by his wife, Geraldean, a brother, Calvin Johnson, and a sister, Lois Atkinson, his children, 22 grandchildren, and 57 great-grandchildren. He was preceded in death by his parents and his youngest brother, John Vurgal Johnson. Garth’s parting message to everyone includes a humble thanks to every friend, neighbor, caregiver, and family member, for every gesture large or small that has been done to assist him and Geraldean these past several years. “It’s all about family!” A memorial Service will be held at Allen-Hall Mortuary, 34 East Center in Logan, Utah, on Monday, July 6, 2020 at 11:00 a.m., with a viewing for family and close friends one hour prior to the service. Services will be live-streamed and may be viewed online at www.allenmortuaries.net by clicking on Garth’s complete obituary. Interment will be at the Lewiston City Cemetery following the memorial service.

The family of Samuel Garth Johnson created this Life Tributes page to make it easy to share your memories.

Services will be live streamed beginning at 11:00 AM on Monday,...