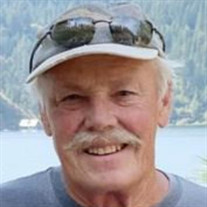 Scott Rawlins passed away Wednesday, January 27, 2021, at the age of 70 with his wife and daughter by his side in Yuma, Arizona. He was born on October 21, 1950, in La Grande, Oregon, to Reed and Ethel Rawlins. He had two brothers and three sisters. Scott lived most of his life in Cache Valley, Utah. He graduated from Sky View High School in 1969. He enlisted in the Army in 1972 and served two years in Okinawa, Japan. He had two sons, Derek and Andy, and one daughter, Desiree. He was a wonderful father and would do anything for his children. Scott married the love of his life, Karen, on December 28, 1994. Scott lived an highly active life; he loved the outdoors. He was an excellent skier and spent many years skiing at Beaver Mountain. He loved traveling with his wife on his motorcycle in his younger years and in the RV in his later years. He enjoyed experiencing different places with his wife, family and friends. Scott could fix anything. He loved figuring out problems and passing these skills on to his children and grandchildren. Scott enjoyed cooking and hosting family BBQs and playing with his grandchildren. He worked for Spindler Construction for many years and enjoyed his work as a crane operator. He made many friends over the course of his career. He was preceded in death by his parents, his son Andy, his younger brother Drew, sisters Deanna and Marsha. He is survived by his wife Karen of Hyde Park, daughter Desiree (Jay) Smith, son Derek (Linda) and stepchildren Rick Cooper, Tracy Cooper and Kari Barker, grandsons Quinn Smith, Erik Rawlins, Utah Barker, and granddaughters Kymbrie, Arnold, Dacia Chambers, and Juno Smith. He is also survived by his brother Dan and sister Alaine Carter. Scott would do anything for anyone, was a friend to so many and will be dearly missed by his friends and family. Graveside services will be held Friday, June 18th at the Hyde Park Cemetery at 1PM. A Celebration of Life will follow at Lions Park at 3PM.

Scott Rawlins passed away Wednesday, January 27, 2021, at the age of 70 with his wife and daughter by his side in Yuma, Arizona. He was born on October 21, 1950, in La Grande, Oregon, to Reed and Ethel Rawlins. He had two brothers and three... View Obituary & Service Information

The family of Scott Rawlins created this Life Tributes page to make it easy to share your memories.

Send flowers to the Rawlins family.