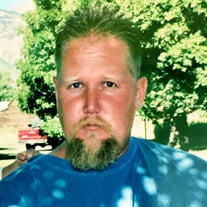 Shawn Devin Hall, 52, passed away tragically in a rollover accident on Thursday, March 18, 2021. Shawn was born September 1, 1968, the third of four children, to honored parents Dallas and Deon Hall. Shawn was a proud resident of Wellsville where he resided his entire life. Starting at a young age, he developed a strong work ethic that began with a job at Anderson’s Dairy and continued while attending Mountain Crest High School where he was a member of the FFA. Upon graduating in 1986, Shawn began his career in construction with Bailey Construction Co. which led him to begin his own company, Haslam and Hall Construction. Shawn would eventually rise to the title of Construction Superintendent for several companies, including Sorenson and Gnehm Construction, Robertson Manufacturing and Lundahl Construction (SSI). Shawn played softball for Hendry Dairy, which, through mutual friends led to a blind date with the love of his life, Lori Ann Lemon. On September 17, 1993, they were married in the Logan Utah LDS Temple. Shawn and Lori built their home and settled in Wellsville, where they raised a son and daughter, Garrett & Madison. Shawn was an avid and dedicated outdoorsman. He was passionate about fishing, hunting, dirt bikes and touring the back country in his jeep, that he built with the help of a close friend. Shawn was a proud member of La Platta Hunting Club. He would spend his life carrying on strong family traditions in the outdoors and instilling sportsmanship and a love of nature in his children. His distinct laugh will be remembered by all. Shawn was proceeded in death by his parents, Dallas Brenchley Hall and Deon Buist Larsen Hall. He is survived by his wife, Lori Ann Lemon Hall; son, Garrett Shawn and daughter, Madison Ann, of Wellsville Utah. Siblings, Brett (Kristi) Hall, Shelley (Doug) Keller and Kamee (Rob) Summers. Along with many other family members and friends. Viewings will be held Sunday, March 28, 2021 at Allen-Hall Mortuary located at 34 East Center in Logan Utah from 5-7 p.m. and 11:00 to 11:45 a.m. March 29th at the Wellsville Stake Center. Funeral services will follow at 12:00 p.m. Interment will be in the Wellsville Cemetery next to his beloved parents. A GoFundMe account has been set up and donations can be made by going to the following link: gf.me/u/znrac6 Services will be livestreamed and may be viewed via the following link: https://us02web.zoom.us/j/88573153509?pwd=cmlnbTI5UVlRdktndHZBRlJSZTVWQT09 Password: Hall

Shawn Devin Hall, 52, passed away tragically in a rollover accident on Thursday, March 18, 2021. Shawn was born September 1, 1968, the third of four children, to honored parents Dallas and Deon Hall. Shawn was a proud resident of Wellsville... View Obituary & Service Information

Shawn Devin Hall, 52, passed away tragically in a rollover accident...

Send flowers to the Hall family.