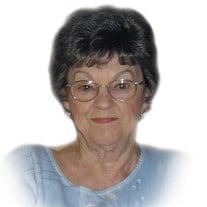 Shirley Ann Baldwin Brown, 93, passed away peacefully on August 7, 2021, at Copper Ridge Health Care Center in West Jordan, Utah. Shirley was born in Cincinnati, Ohio on June 14, 1928, to Ralph Christian Baldwin and Dorthea Jean Stewart. She was an only child for the first 17 years of her life until her younger brother Richard was born. At an early age, Shirley took an interest in modeling and at age 10, began modeling for Shillito’s Department Store in Cincinnati, Ohio. By the time Shirley was 12, she was discovered by John Robert Powers Modeling agency in New York City. Shirley and her mother moved to New York City to pursue modeling. Her father soon joined them. By the time Shirley was 14 years old, she was modeling for Lord & Taylor, Saks 5th Avenue and Macy’s department stores. She attended Professional Children’s High School with other models, musicians, actors, and actresses. She had a great speaking voice and studied acting and radio announcing. Her first job in radio was with CBS in New York City. She was hired by Bigelow’s Department Store in Jamestown, NY for the “Calling All Girls” (a Fashion Show for Girls) radio program at Station WJTN. In 1945, the family moved back to Cincinnati where Shirley finished high school and worked for Radio Station WLW. Shirley continued her education by attending Western College for Women in Oxford, Ohio. It was there she met Ernest Robert Buck on a blind date. Ernest and Shirley were married on the “Bride and Groom” radio show in Hollywood, CA on April 22, 1949. Ernest became a Petroleum Geologist. He and Shirley moved to Wichita, Kansas to work for the Ohio Oil Company and this is where they started their family. Shirley stayed home to rear their family and Ernest began his career as a petroleum geologist. In 1971, Shirley became a receptionist in the medical field until retirement. In 1975, she became a member of The Church of Jesus Christ of Latter-day Saints. She lived the last 52 years of her life on her own. She was independent, always had a pet cat, was a friend to all who knew her and loved collecting roosters (had a houseful both inside and out). She was meticulous in keeping notes on her many calendars, enjoyed ice-cream on a stick, orange juice, boost and her IPad to keep up with family and friends on Facebook, E-mails, and Facetime. Shirley is preceded in death by her parents Ralph and Dorthea Baldwin and 1st husband, Ernest R. Buck. She is survived by her brother Richard Stewart (Bernadette) Baldwin, daughter Deborah Ann (David) Lucas and son David Bruce (Jana Lee) Buck, along with Grandchildren and Great Grandchildren. A special thanks to the caretakers at Copper Ridge Health Care and Heidi with Home Care & Hospice who compassionately cared for Mom during her 4-month battle with lung cancer. A family graveside service will be held August 12, 2021 at Noon. Internment will be at the Logan City Cemetery, Logan, Utah. Services are under the direction of Allen-Hall Mortuary. In lieu of flowers the family asks that donations be made to your favorite charity.

The family of Shirley Ann Baldwin Brown created this Life Tributes page to make it easy to share your memories.