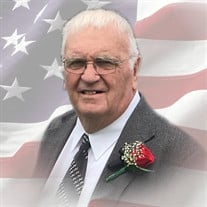 Sidney John Hansen, 85: of Amalga UT passed away on Saturday, November 27, 2021 at his home in Amalga. Sid was born September 23, 1936, in Amalga, Utah, the fourth son of Vagn and Ruth Schiess Hansen. He and his brothers--Richard, Keith, Sheridan, and Dean--grew up on the family farm. The family first lived in a little two-room house directly west of Grandpa H.P. and Grandma Marie Hansen. During the summer, the older boys slept in a log cabin. In 1948 the yellow brick home was built just east of the canal. The brothers and their friends made their own fun, swimming in the canal, skinny dipping in the river bottoms, and playing ball. Sid attended Summit School, Smithfield Jr. High and graduated from North Cache High School in 1954. He played baseball and football in high school and made all-region status in football both as a junior and a senior. He also played for the Amalga Ward Priests' team (which had only seven players). This team played for district championship in the Nelson Fieldhouse in Logan; and although they lost the final game, it was a proud accomplishment for the little town of Amalga to have almost reached the top. While farming full-time with his father and brother, Richard, Sid joined the National Guard on March 21, 1955, and served for six years as a cook. He continued throughout his life his love of dairy farming. He enjoyed working the land, and watching the crops grow and be harvested. On April 14, 1961, in the Logan L.D.S. Temple, Sid married Carol Woodruff of Smithfield. Sid and Carol first lived in a little house set on the foundation of the old Amalga schoolhouse. Then in 1967 they built the brick house, still the family home, just to the north. Sid and Carol are the parents of five children: DeAnn Anderson (Kyle), Dixie Sase (Dave), Marcene Bennett (Dave), Douglas John Hansen (Camille), and Shelley Keller (Nathan). Carol passed away of cancer on September 24, 1986. She supported Sid and their kids in all their endeavors and opened her home to family and friends. When Mom passed away this was an extremely difficult time but Dad stepped forward and made his family his number one priority. Sid served for 15 years as financial clerk of the Amalga Ward, working with three Bishoprics. He also coached the Priests' basketball team for 20 years. He served on the Amalga Town Board for 16 years. During those years, the town officials upgraded the water works, built the town hall, created Sugar Park, and began the 24th of July celebrations. Sid was also president of the Amalga Wildlife District for four years. He was a member of the Smithfield Lions Club and enjoyed attending many conventions. A life-long sports enthusiast, he enjoys collecting sports memorabilia, as well as stamps and coins. Sid married Maridene Mather Rock on February 18, 1989. Sid and Maridene enjoyed traveling to many places. He enjoyed spending countless hours at his grandkid’s activities. He was their greatest supporter. His family was his pride and joy. They brought him his happiest and most cherished moments. Sid is survived by his wife Maridene and her four sons. His 5 children and their spouses, 17 grandchildren, and 10 great-grandchildren. His brothers: Keith, Sheridan (Annette), and Dean (Relle). He is proceeded in death by his eternal companion, Carol. Parents Vagn and Ruth, in-laws Wilford and Afton Woodruff, brother Richard, and sister’s in-law LuDean and Carroll. Funeral services will be held at 12:00 pm on Friday, December 3, 2021 in the Amalga Ward Chapel, 6521 N 2400 W, in Amalga. A viewing will be held from 6-8 p.m. on Thursday evening at Allen Mortuary of North Logan, 420 E 1800 N, North Logan, and from 10:30 – 11:30 a.m. prior to the services at the Amalga Ward church. Interment will be in the Smithfield City Cemetery. The services may be viewed via Zoom at: https://zoom.us/j/92645791104 Condolences may be expressed online at www.allenmortuaries.net

Sidney John Hansen, 85: of Amalga UT passed away on Saturday, November 27, 2021 at his home in Amalga. Sid was born September 23, 1936, in Amalga, Utah, the fourth son of Vagn and Ruth Schiess Hansen. He and his brothers--Richard, Keith, Sheridan,... View Obituary & Service Information

The family of Sidney John Hansen created this Life Tributes page to make it easy to share your memories.

Sidney John Hansen, 85: of Amalga UT passed away on Saturday,...