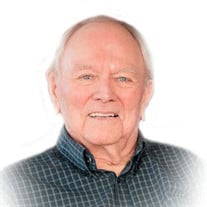 Stephen Hatch John, 86 (and still younger than his wife Bonnie), passed away peacefully on Tuesday, May 11, 2021 due to complications of Alzheimer’s disease. Steve was born on July 10, 1934 in Logan to Alban Harries and Helen Hatch John. Steve spent his entire life in Logan, attending Logan High School and excelled in many sports including basketball, football, baseball, and was an accomplished swimmer. Steve attended Utah State University, where he pledged to Sigma Chi and was a member of the golf team. Steve and his beautiful wife Bonnie were high school sweethearts. Steve broke his collarbone playing football. During his convalescence he spent many hours at Bonnie’s house listening to records, especially “Unforgettable” by Nat King Cole. Steve and Bonnie were married August 7, 1954 at St Thomas Aquinas Catholic Church. They made their home in Logan where they raised 5 children: Stephanie - “Snowflake”, Michael – “Michelob”, David – “Big Wave”, Nancy – “The Belle” and Jeffrey – “Jefferson Airplane”. He loved spending time with his family and the many experiences they had together. Traditions were important to Steve. Many family fish frys, trips to Bear Lake and holidays created many cherished memories. Steve loved the outdoors and could often be found hunting, fishing or golfing. He was a member and past president of the Logan Golf and Country Club where he had many cherished friends. Steve spent his life as a brick mason where he learned the trade from his father-in-law, Grant Neilsen. He was proud of the many structures he had a hand in creating throughout the intermountain west. He passed the trade onto his oldest son, Michael. Steve will be greatly missed. His piercing blue eyes, infectious sense of humor and hospitable nature will be fondly remembered. Steve is survived by his wife of 66 years, Bonnie, and his children: Stephanie (Rick) Thomas, Smithfield; Michael (Laurie), North Logan; Nancy (Lance) Reese, Kaysville; and Jeffrey (Jeanette), Providence, along with 17 grandchildren and 45 great grandchildren that he dearly loved. He was preceded in death by his parents, brothers Richard and David, a son David, and two grandchildren, Trina Marie Thomas and Tiana Davis. The family would like to thank Legacy House Assisted Living, and Sunshine Home Health and Hospice, especially Priscilla for their excellent care of Steve. A Graveside dedication will be held for the immediate family on Friday, May 14 at noon. A Celebration of Life will be held at the Logan Golf and Country Club on Saturday, June 5th from 4:00 – 7:00 p.m. In his honor, please give everyone you love a “Steve John” hug!

Stephen Hatch John, 86 (and still younger than his wife Bonnie), passed away peacefully on Tuesday, May 11, 2021 due to complications of Alzheimer&#8217;s disease. Steve was born on July 10, 1934 in Logan to Alban Harries and Helen Hatch John.... View Obituary & Service Information

The family of Stephen Hatch John created this Life Tributes page to make it easy to share your memories.

Stephen Hatch John, 86 (and still younger than his wife Bonnie),...

Send flowers to the John family.