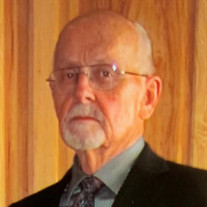 Stephen Leo Larsen passed away at his home in Nibley, Utah with his loving wife by his side on January 27, 2021 from idiopathic pulmonary fibrosis. Steve was born in Logan, Utah on September 4, 1944 to Leo Comish and Afton Smith Larsen. His family lived in Idaho and then moved to Cutler Dam, Utah while he was a freshman in high school. He learned the value of hard work and self-reliance while moving sprinkler pipes, hauling hay and working as a grounds keeper at Cutler Dam Power Plant. He earned his Eagle Scout Award. Because of the positive influence of a local farmer, his bishop and his football/swimming coach, Steve decided to serve a mission for The Church of Jesus Christ of Latter Day Saints. After his mission in Texas, Steve faithfully served in many church callings and his love was teaching. He was a stake missionary while in the army stationed at Dugway Proving Grounds. He directed the Vietnam casualty notifications and honorary military funeral arrangements for gold star families. Steve was an avid fly fisherman. He spent many wonderful days at undivulged fly fishing spots. He loved to hunt and was a pilot and professional photographer. He spent his 40 year career as a master cheese maker, traveling widely, designing cheese plants and consulting startups. Steve met the love of his life, Christine Coulam in 2005. They were sealed in the Logan Temple. They enjoyed family get-togethers, serving in the temple, and traveling around the world. Above all, was Steve's love for his family, Heavenly Father and Jesus Christ. Steve is survived by his wife, Christine, his children: John (Amy), Michael, Paula, Derik, (Ashley), Danny (Eva); Christine's children: Bill Coulam (Jenny), Heidi (Micha) Kempener, Kathryn (Curtis) Fielding; Clark (Karen) Coulam; Jeanette Kincheloe; Allison (John) Anderson; his sisters Julie (Jeff) Wood and Kathryn (Lyle) Holmgren and 31 grandchildren. Steve is preceded in death by his parents and sister Marli (Dale) Nebeker. The family would like to give special thanks to David Gurule, Mike Boyer and Dr. Vera Carlson of Rocky Mountain Hospice for their tender and professional care over the past year. Funeral services for family and close friends (because of Covid-19 precautions) will be held at 11AM on Wednesday, February 3rd at the Nibley 10th Ward, 2825 South 1000 West, Nibley, Utah. A viewing will be prior from 10:00-10:45AM with burial in the Beaver Dam Cemetery. Funeral services will be streamed and watched at https://youtu.be/iG_V_SBZMkg .

Stephen Leo Larsen passed away at his home in Nibley, Utah with his loving wife by his side on January 27, 2021 from idiopathic pulmonary fibrosis. Steve was born in Logan, Utah on September 4, 1944 to Leo Comish and Afton Smith... View Obituary & Service Information

Stephen Leo Larsen passed away at his home in Nibley, Utah with...