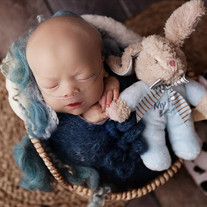 Cuddled between his parents, Stetson Wyatt Barker, 5 weeks old, gently passed away into the arms of our loving Heavenly Father on Saturday, March 27, 2021, at his home in Logan, Utah. Stetson’s parents learned that he would likely be stillborn when his mother was just 23 weeks pregnant. However, miraculously, he was born breathing and crying. Stetson was born on February 20, 2021, in Salt Lake City, Utah to Levi and Felicia Barker of Logan, Utah. He weighed 7 lbs 10.8 oz, was 17.5 inches long, and had a head full of silky, golden hair. After Stetson’s birth, his parents learned that he had a rare and incurable genetic disease and was not expected to live long. Stetson’s favorite activities included snuggles and kisses, sucking on his orange binkie, nestling with his stuffed “lamby,” being swaddled in his cowboy blanket, holding Mom and Dad’s finger, rubbing his own ears, being stroked on the top of his head, and “skin to skin” cuddles with Mom. After 4 weeks in the hospital, Stetson was stable enough to go home to work on his “bucket list” and spend his last days surrounded by his loving family. During his last week on earth, Stetson enjoyed being smothered with hugs and kisses by his two-year-old sister, Georgi, met his grandparents, aunts, uncles and cousins, received his baby blessing, watched sports on the couch with his dad, posed for numerous photos, and was baby-worn by Mom while on a sunset walk outside. Those who met Stetson described him as a “warrior”, a “fighter”, and a “spiritual giant.” All who held him could feel his spiritual strength, felt peace and joy and experienced a deep reverence for him. Stetson is greatly loved and he will be dearly missed. Stetson is survived by his parents, Levi and Felicia Barker, sister, Georgina June Barker, paternal grandparents, Kim and Shauna Barker, maternal grandparents, Frank and Tammy John, great-grandparents, and many aunts, uncles, and cousins. An open viewing will be held on Friday, April 9th between 6-8pm at Allen-Hall Mortuary,34 East Center Street in Logan, Utah. A Memorial Service will be held on Saturday April 10th at 1pm (Allen-Hall Mortuary) followed by a private graveside ceremony. Funeral donations can be made directly to the Barker family. Condolences may be expressed online at www.allenmortuaries.net

Cuddled between his parents, Stetson Wyatt Barker, 5 weeks old, gently passed away into the arms of our loving Heavenly Father on Saturday, March 27, 2021, at his home in Logan, Utah. Stetson&#8217;s parents learned that he would likely be... View Obituary & Service Information

The family of Stetson Wyatt Barker created this Life Tributes page to make it easy to share your memories.

Send flowers to the Barker family.