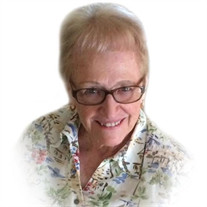 Sylvia Rae Pierotti Keller Nielsen passed on from this life on July 27, 2021. She was a devoted wife and mother, always willing to serve, kind to all, and cheerful of spirit. She will be missed every day by family and friends who also rejoice in her life well lived. She is survived by two brothers, Raymond Charles (Gene) Pierotti of Atlanta, GA and Lawrence (Barbara) Pierotti of Memphis,TN husband Clair Leon Nielsen, sons Bennett (Lori) Keller and Chris (Monica) Keller, step-son Scott (Kathy) Nielsen, daughter-in-law Alayne Nielsen, 13 grandchildren, and 14 great-grandchildren. She is preceded in death by her parents, sister Ruth (Vern) Christensen, brother John (Felicia) Pierotti, first husband Dallas Keller, and step-son Kevin (Alayne) Nielsen. Sylvia was born August 22, 1930 in Bountiful, UT to Raymond Faust and Ruth Clegg Pierotti. She attended Davis County schools and upon graduation became a telephone operator. She married Dallas Keller on February 14, 1952 after his LDS mission. They subsequently lived in Washington, D.C. where her husband worked for Secretary of Agriculture Benson during the Eisenhower administration. Later they moved to Whittier, CA where her husband worked for Howard Hughes. She was the wind beneath his wings as he pursued many endeavors. She was a kind and attentive wife, mother and friend to everyone around her. When Dallas passed away in 1972, those friends rallied around her and supported her through that difficult time. Sylvia married Clair Leon Nielsen on June 1, 1976. Together they raised their boys and continued on many adventures. Upon the boys high school graduation, Clair and Sylvia made the decision to move to Logan where they eventually opened a pizza franchise. Sylvia, again, the wind beneath her husband’s wings, was a support to her family as they worked hard to make the business successful. While she also was an excellent homemaker, her role in the success of the family business cannot go unrecognized. In her sunset years, Sylvia enjoyed spending time with friends and family, always loving and serving. She will be remembered for the many events she attended in support of her children and grandchildren, as well as preparing breakfast for each separate family member as they arose while staying in her home. Viewing will be held on Saturday, July 31, 2021 from 9:30-10:30am at the Allen Mortuary of North Logan, 420 E 1800 N, North Logan with funeral to follow beginning at 11:00am. Burial will be 3:00pm at the Mink Creek Cemetery in Idaho. Funeral services will be live streamed and can be viewed via the following link (Password: Sylvia): https://us02web.zoom.us/j/86303898933?pwd=ZE8zMjNmTjY5V1liWk0rTGxhQUJNdz09 Condolences may be expressed online at www.allenmortuaries.com

Sylvia Rae Pierotti Keller Nielsen passed on from this life on July 27, 2021. She was a devoted wife and mother, always willing to serve, kind to all, and cheerful of spirit. She will be missed every day by family and friends who also rejoice... View Obituary & Service Information

Sylvia Rae Pierotti Keller Nielsen passed on from this life on...

Send flowers to the Nielsen family.