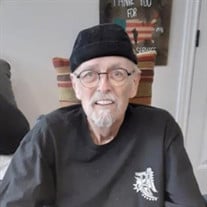 Terrence Lee Meyer, born on March 22, 1946 in Minnesota. He was a fighter until the end and passed away peacefully at home with his beloved wife of 40 years, Carol Meyer and their five children Keri Meyer (Jarod), Shane Meyer (Kat), Jennifer Castillo (Mario), Ashley McKnight (Kollin) and Garrett Meyer (Kailey) by his side on Monday, May 11, 2020 at 11:50am in Smithfield, Utah. Also survived by his brother John Robinson (Dora & family) along with his deceased sister Deborah Davis’ husband Rick Davis and Terry’s eleven grandchildren Jordann Castillo McFarland, Natalia Castillo, Paolo Castillo, Kentlee McKnight, Abbigail Meyer, David Castillo, Gage Meyer, Deegan McKnight, Karma Meyer, Owen Meyer, Harley Meyer, his dog Missy and his best friend Richard Mabius. Son of Eugene Meyer and Lilian Kolbus, however Terry was raised by Lilian and Ed Robinson. The family lived in Salt Lake City and in 1957 they moved to Denver, Colorado where Terry enjoyed numerous camping trips in the mountains of Colorado. Terry loved to fish in his waders in the rivers. In 1962 the family moved to Fontana, California. Terry lived there until he graduated high school and entered the Marine Corps shortly after graduation. As a teenager he had a passion for rock music and was described as a walking jukebox. He knew the name of every song, the artist and the year it came out. Terry served proudly for two years in the Marine Corp, stationed in Hawai`i following boot camp at Camp Pendleton. While in Hawai`i he fell in love with the beach and took up surfing. He and his best friend Richard were inseparable from the moment they became friends. He married his second wife Carol in 1980 and raised their children in Sacramento where Terry graduated from Lincoln Law School with a Doctorate of Law and practiced Family Law until they moved to Utah in November 1999. For his many grandchildren and all the others who knew him, they will carry on the little things - like his love for tootsie rolls, cherry pie and Fleetwood Mac on VHS repeat; his unexpected passions for karate, Lord of the Dance and rearranging furniture semi-annually. The family hopes to carry on his helpless knack for “if you’re not early you’re late” punctuality, his ability to always find a way to resolve anything (+/- a roll of duct tape), and his often way of rambling on and on about how much he loved you. Terrence Lee Meyer’s life was a blessing, his memory will be a treasure, and he is loved beyond words and will be missed beyond measure. It was Terry’s wishes not to have services held.

Terrence Lee Meyer, born on March 22, 1946 in Minnesota. He was a fighter until the end and passed away peacefully at home with his beloved wife of 40 years, Carol Meyer and their five children Keri Meyer (Jarod), Shane Meyer (Kat), Jennifer... View Obituary & Service Information

The family of Terrence Lee Meyer created this Life Tributes page to make it easy to share your memories.

Send flowers to the Meyer family.