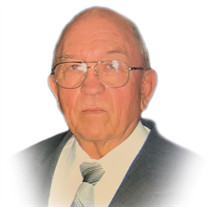 Theron Ray Blazzard was born on January 11, 1930 in Cedar City, Utah. His parents were John Ezra Blazzard and Nina Bunker. He died November 9, 2020 of natural causes of age in his 90th year. His family moved to Logan, Utah while he was still young, and he grew up there. He was on the swim team at Logan High School and got his baccalaureate degree in Geology at Utah State University when it was still Utah State Agricultural College. When he was young, he worked at the local golf course and played tennis. He also liked camping, hunting, fishing, and other outdoor activities. He served in the Korean War and married Vella May Allen when he got home. They had three children: Jeannette, Brian, and Evelyn. Most of the family vacations consisted of visiting Logan, Utah where Theron’s and Vella May’s parents lived or going on camping, fishing, or hunting trips in Wyoming. He liked making things and had all the equipment for doing that. He made bookshelves, outdoor patio furniture, a boat, and a canoe. He also built a garage. The family used the canoe for many years for fishing trips on the Green River in Wyoming. He worked as a petroleum geologist in Utah, Wyoming, and Colorado. He was considered one of the best log men, which means he interpreted the results of core samples obtained by drilling rigs. He enjoyed geology and being out in nature with the nature rock formations. He continued in the field until he felt that the industry in the United States was becoming too unstable for him to stay with it. When he left the field of geology, he started work on his second interest, which was farming. He had a lot that was ¾ acre and had already used the property for a significant garden and for some fruit trees. Then he decided to start a greenhouse tomato business and made good money with that for several years until he decided to retire and move to Logan, Utah. Theron and Vella May lived in Logan the rest of their lives. Vella May died in 2007. Theron continued in reasonable health for many years. At first, he only had health problems that could be taken care of with medications, but in his last year, his feet caused him problems that limited his mobility and things got worse for him from then until he died. He was proceeded in death by his siblings: Doreen Holmes, Joyce Alford, John Lynn Blazzard, and Mary Dean Green. He is survived by his children and sons-in-law: Jeannette Proctor and Richard Dean Proctor, Brian Allen Blazzard, and Evelyn Beyer and Henry Gerald Beyer. He is also survived by many step-grandchildren. He was given a military funeral. Services are under the direction of Allen-Hall Mortuary. Condolences may be expressed online at www.allenmortuaries.net

Theron Ray Blazzard was born on January 11, 1930 in Cedar City, Utah. His parents were John Ezra Blazzard and Nina Bunker. He died November 9, 2020 of natural causes of age in his 90th year. His family moved to Logan, Utah while he was still... View Obituary & Service Information

The family of Theron Ray Blazzard created this Life Tributes page to make it easy to share your memories.

Send flowers to the Blazzard family.