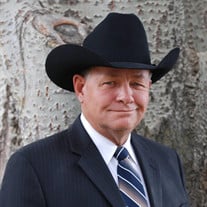 To view the graveside services live, please click on the following link: https://us02web.zoom.us/j/85467971850 Thomas J Weston was born in Montpelier, Idaho on December 13, 1951 to George Wesley Weston and Theda Mattson of Laketown, Utah. He was the coconspirator of his two brothers and the tormentor of his three younger sisters. The ranch was his playground until he grew old enough to work; haying, moving cows, and dry farming east of Bear Lake. For all his hard work, he played harder and could often be found swimming in the lake, riding horses, and roaming the town with his bike and BB gun. Tom graduated from North Rich High School in 1970 and attended two weeks of college before realizing it was not for him. He served an honorable LDS mission in The Australia West Mission from 1971—1973. While in Australia, he shipped packages of kangaroo hides, recorded tapes, boomerangs, and opals. The dang Aussies wouldn’t let him send home shark teeth, or ivories. Upon returning home, Tom met and fell in love with Vickie Spencer of Randolph, Utah. They were married in the Ogden Utah Temple, August 30, 1973, and have been married for 47 years. Together, they raised four children: Dana Lee, Wesley, Joshua, and Kalon. Tom joined his dad and brothers in the ranching business and enjoyed breaking colts. He loved swimming, fishing, hunting, collecting guns, and waterskiing in Bear Lake (which he often bragged he could do from the shore and back without ever getting wet). Tom was a mountain of a man with a laugh to match. He served in various positions in his church and his community. He was an active member of the Utah Cattlemen’s Association, a Brand Inspector for the State of Utah, and drove the local school bus. He was most well-known for his time spent as a Rich County Commissioner where he served for sixteen years. He took great pride in caring for his family, especially his aging mother, but his greatest accomplishment was his children and grandchildren. He passed away on June 4, 2020 in Rich County, Utah at the age of 68. He is survived by his wife, Vickie Weston; four children: Dana Lee (Paul) Lazcanotegui, Wesley (Kelly) Weston, Joshua (Ashley) Weston, and Kalon Weston; seven grandchildren; his mother, Theda Mattson Weston; and his siblings; Alice (Kent) Argyle, Shelly Mettman, Chuck Webb, and Cathy Weston. He was preceded in death by his father; George Wesley Weston; his siblings, Christine Weston Webb, Samuel M Weston, George Terrill Weston; and brother-in-law El Mettman. The viewing is Friday, June 12 from 10-11:30 a.m. at the Laketown Ward Cultural Hall. The Graveside service will start at 12:00 p.m. at the Laketown Cemetery. The graveside service may be viewed via the Zoom Application.

The family of Thomas J Weston created this Life Tributes page to make it easy to share your memories.

To view the graveside services live, please click on the following...

Send flowers to the Weston family.