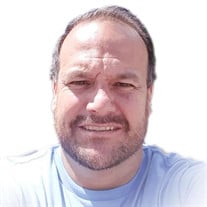 Tony Todd Jensen, 45, of Providence, Utah, passed away on May 1, 2021 at Ogden Regional Medical Center surrounded by his family. Tony was born on April 1, 1976 to Todd and LuAnn Jensen in Logan, Utah. He was the second of five children and the eldest son. Tony was active during his childhood and enjoyed the most out of life. He enjoyed scouting from an early age and eventually earned his eagle scout. While growing up he became a great water skier and loved going to Lake Powell. He often took his younger siblings fishing, duck hunting, and boating. He graduated from Mountain Crest High School in 1995 and went on to serve a mission for The Church of Jesus Christ of Latter-Day Saints in Independence Missouri. After returning from his mission, he married Lindsay Parker. They had two children Jake and Tessa. They later divorced but remained close friends until his passing. Tony owned his own foundation tarring business as he started college. He was always interested in aviation and enjoyed his time as a flight instructor while attending Utah State University. After graduating from Utah State University Tony became employed by Union Pacific Railroad as a conductor. He worked as a train conductor for many years. He enjoyed working for the railroad and always had a great story to tell. His favorite thing in life was being a dad to Jake and Tessa. He loved watching his kids grow up and spending as much time with them as possible. Tony enjoyed attending all their sporting events, snow skiing with his kids, riding motorcycles with Jake, and taking Tessa to get slushies. A hobby he had at young age that continued into his adult life was R.C. airplanes and cars. Tony had a great sense of humor and loved to tease. He had a great laugh, and everyone heard it often. Tony was a big teddy bear with a generous heart. He is now in peace and smiling down on us from above. We will cherish the memories and be grateful for his presence in our lives. Tony is survived by his grandfather LAWRENCE Wiser, his parents TODD and LU ANN Jensen, his siblings, CAMI Lewis, CLAY and Savannah Jensen, JULIE and Brady Mallory, JON and Makenzie Jensen, and his children JAKE and TESSA Jensen, as well as many nieces, nephews, aunts, uncles, and cousins. Graveside services will be at 12 p.m. on Wednesday, May 5th at the Providence City Cemetery. A viewing will be held prior from 10-11:30 a.m. at Allen-Hall Mortuary, 34 East Center, in Logan. The service will be streamed live through www.allenmortuaries.net. To view the graveside live on Wednesday at 12 p.m., click on the following link (password: Tony): https://us02web.zoom.us/j/87345583108?pwd=MEl5Ri9rOWY5amtENVRyR3psZ2k3QT09

Tony Todd Jensen, 45, of Providence, Utah, passed away on May 1, 2021 at Ogden Regional Medical Center surrounded by his family. Tony was born on April 1, 1976 to Todd and LuAnn Jensen in Logan, Utah. He was the second of five children and... View Obituary & Service Information

The family of Tony T. Jensen created this Life Tributes page to make it easy to share your memories.

Tony Todd Jensen, 45, of Providence, Utah, passed away on May...