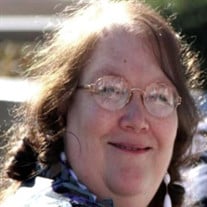 After a valiant battle with cancer beloved wife, mother, and sister Verla Faye Pease Tolman began many joyful reunions on Wednesday, May 12, 2021 as she ended her earthly journey to return home to her Heavenly Father. Verla was born 1 November 1952 at Moses Lake, Washington, to Leonard Franklin Pease and Alnora Noble. Her family moved several times the first few years of her life before settling in Yakima, Washington. She was blessed to be surrounded by a large family with 13 siblings and 5 half siblings. She attended Wide Hollow Elementary and West Valley High School. At the age of 8 she was baptized and became a member of The Church of Jesus Christ of Latter-day Saints. She was ever faithful in attending her meetings and fulfilling various church callings. Verla met Thomas Wilson Tolman, who was in the military, and they were married in the Logan, Utah Temple of the church on 19 January 1972. That took her to North Carolina where Thomas was stationed, then to Lawton Oklahoma, then to Alaska. After three years they were blessed with their firstborn child, Alma. Thomas finished his 6 year military service in Alaska and after a few months in Ogden, Utah they moved to the Redwood area of Salt Lake City, Utah and eventually bought a house in Kearns, Utah. While in the Salt Lake Valley they were joined by two additional children Elden & April. With Thomas’ college degree done they moved to the greater Portland, Oregon area for new work. There they added Marci to the family. After a few more years work brought them back to Logan, Utah where they have remained – in three different houses. Here their family grew with the addition of Alexis, David, Thomas, Natalia, and Stephen. Coming from a large family helped Verla prepare for one of her own. She raised her family with love and frankness, with skills she brought from her family growing up, to hers, and more knowledge she learned along the way, she was always learning and an avid reader. She raised her family the best she knew how, making sure they knew they were loved, what was expected, and that they could face hard things and overcome, or work through anything with faith in the Lord Jesus Christ and perseverance. In addition to her family Verla found joy during her earthly journey through her testimony of the gospel of Jesus Christ, serving diligently in many callings within the church in all the locations they had resided. Verla loved learning more about and recording her family history as a genealogist, and taught, and helped many connect to their families. Verla enjoyed finding new and creative ways to serve anyone she knew could use something that she could give (preferably anonymously) like Christmas gifting, various humanitarian projects. As Verla’s health declined over the last 10 years with various illnesses she was frustrated she couldn’t serve her family or others as she would like. She learned to make fleece blankets from somewhere and got excited as it was something she could do at her own pace throughout the years of declining health. In addition to family these were donated to worthy causes. Verla was always looking for and enjoying service in many more little meaningful ways. Verla was preceded in death, and therefore able to joyfully reunite, with her parents, her brothers Kirk Lyman Pease and Leonard Wayne Pease, her sisters Sharon Elizabeth Pease and Alnora Carolyn Carson, her sister-in-law Carole Adams Pease, brother-in-law Donald Gollehon, and her precious daughter Alexis Marie Tolman. She is celebrated still by her husband of 49 years, her 8 remaining children and their spouses, her remaining 15 siblings and their spouses, 21 grandchildren, and a number of treasured and cherished friends. A viewing will be held at Allen-Hall Mortuary on East Center Street in Logan from 6-8pm on May 17th 2021. A viewing will be held at the Logan 5th Ward chapel located at 300 N 500 E, Logan from 930-1030am and followed by the funeral at 11am. Verla will be laid to rest next to her daughter Alexis and other relatives in the Logan City Cemetery (north side center) about 1000 East 1000 N. Services will be livestreamed and may be viewed online via the following link: https://us02web.zoom.us/j/81389600223?pwd=bFJDTmsrbHhYUk5KY2xobmZQOHNHdz09 Password: Verla

After a valiant battle with cancer beloved wife, mother, and sister Verla Faye Pease Tolman began many joyful reunions on Wednesday, May 12, 2021 as she ended her earthly journey to return home to her Heavenly Father. Verla was born 1 November... View Obituary & Service Information

After a valiant battle with cancer beloved wife, mother, and...

Send flowers to the Tolman family.