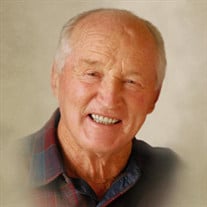 To join the service at 11 am please follow this link. https://thevoid.zoom.us/j/96941010362 On Saturday, April 18, 2020, Verlin M Simmons, passed away at age 90. Verlin was born December 22, 1929 in Charleston, UT to John and Mary Ann (McCulloch) Simmons. He and his future wife, Dot Taylor, were student body president and vice president at Wasatch High School, where he was also an All State basketball player. Verlin and Dot raised two sons, Randy and Val, and two daughters, Jane and Laurel. He grew up milking cows; thinning beets; and irrigating, cutting, raking, hauling, and tromping hay. There was also a lot of rock and snowball throwing, deer hunting, fishing, sleigh riding, horse riding, and ball games. Verlin learned to work hard and to play just as hard. Perhaps because he did not like working for someone else, Verlin was a serial entrepreneur. He and a friend gathered night crawlers to sell to fishermen who were on their way to Strawberry Reservoir. He and some friends invented and marketed the Iggy Snow Block Maker. He invented a trimming chute, taught himself to trim cows’ feet and for thirty years visited dairy farms in Utah and Idaho correcting their cows’ posture. Snowmobiles became a big part of his life as he and his son Val invented and sold plastic snowmobile track cleats. When that idea was incorporated into snowmobile tracks, he had a dream about making snowmobile skis out of plastic. He and Val went to work and created the Simmons Flexi-Ski that revolutionized snowmobile skis. At age 64 he stopped trimming cows’ feet and concentrated on what became a flourishing ski business. He was a fearless snowmobiler, always trying to outclimb, outjump, and outrun all competitors. He outran one avalanche and was buried by another, but Val and friends dug him out. At age 54, he won the annual World Championship Hill Climb in Jackson, Wyoming. For nearly 20 years, Verlin took Boy Scouts into the Wind River mountains (Bridger Wilderness) in Wyoming where he taught them to hike, camp, cook, fish and climb mountains. Generations of those scouts’ children and grandchildren have followed in their footsteps. More than 50 of his scouts became Eagle Scouts and he was able to present the Eagle Scout award to one of his grandsons on top of Mount Victor, one of the tallest mountains in Wyoming. The Boy Scouts of America presented him the Silver Beaver award. He was an avid and successful gardener. His tomatoes were spectacular, tall, and always ripe before anyone else’s. A recent cherry tomato plant grew fourteen feet tall and had to be picked by standing in the bucket of his tractor and raised to the top. He planted two corn rows every two weeks so he often had the earliest and latest corn. Verlin’s cantaloupe hills produced so well he gave cantaloupe to neighbors and friends and still had to have an extra refrigerator in the garage to keep them from spoiling. He was a caring, loving neighbor, teacher, and bishop. He loved his family profoundly and had a gift for making each of them feel loved and special. If a new grand-baby was brought by to see him and Dot, he would quickly go shave (for the second time that day) so his face was smooth to kiss the baby. He included his kids and grand-kids in everything he did and faithfully attended their sporting events. Verlin is preceded in death by Dot, 12 siblings and his granddaughter, Kim. He said the secret to happiness is to marry a good woman and he has dearly missed Dot since she died in 2017. He is survived by his brothers Garth and Darwin; his children Randy (Janet Renner), Val (Wendy Robinson), Jane (Gary Olsen), and Laurel (Farrell Edwards); 21 grandchildren; and 43 great grandchildren. Funeral Services will be held Saturday April 25, 2020. Because of Covid 19, the only way to attend the funeral will be to watch the broadcast. To join the service at 11 am please follow this link. https://thevoid.zoom.us/j/96941010362. Beginning at 11:00 am, a short video presentation will be shown of Verlin’s life. The funeral will then begin at 11:15 am. He will be buried next to Dot in the Providence, Utah cemetery. We wish we could gather in person to celebrate this great man and hug each of you. Please take the opportunity to sign the guest book found at the link above. Services are under the direction of Allen Mortuaries.

The family of Verlin M Simmons created this Life Tributes page to make it easy to share your memories.

Send flowers to the Simmons family.