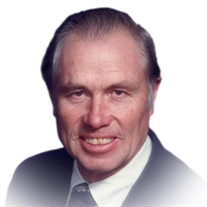 Vern G. Stembridge passed away on July 3, 2021. He was born December 20, 1931 to Gordon & Evelyn Stembridge in Oakley, Utah. He was the 2nd of 5 children. The family lived in Peoa, Utah where they farmed and ranched. When he completed high school he served in the Army as a military police. Then he served a mission for the Church of Jesus Christ of Latter-Day Saints in England. When he returned home he met and married Dorothy Mecham in the Salt Lake Temple in a double wedding with Dorothy’s sister, Mary & Merrill Bellows. Vern had become friends with Elder Bellows on his mission. It was through him that he met Dorothy - the love of his life. After graduating from Utah State University with his bachelors’ degree he moved with his family to Wanship, Utah where they raised their family. He worked for UDOT (Utah Department of Transportation) as an Engineer. Later in life, they moved to Providence, Utah to be closer to lots of their family. Vern & Dorothy had 6 children. He loved spending time with his family. He loved the great outdoors. He was a faithful member of The Church of Jesus Christ of Latter-Day Saints. He served in many callings including Bishop twice. He was a great example to his family and friends. He could build and fix almost anything including building his home, making play cupboards, barns and much more for his children. The favorite of children, grandchildren and even great grandchildren was his marble machine. He also said that was his hardest project. They took their family on many wonderful vacations. They loved their family and were a great influence on them. He is preceded in death by his wife Dorothy, son Brent, parents, 2 brothers Eldon & Melvin, 1 great grandchild. He is survived by his children Diane (Scott) Falslev, Angela (Kurt) Christoffersen, Steven (Jodi) Stembridge, Carolyn (Bob) Moore and Alicia (Bryan) Rollo, 19 grandchildren, 21 great grandchildren, a sister Ione and Brother Wendell. Funeral services will be on Saturday, July 10 at 10:30 a.m. at the Providence 8th Ward Chapel (155 N. 100 E. Providence, UT). There will be a viewing held on Friday, July 9 from 6-8 p.m. at Allen-Hall Mortuary (34 E. Center Street, Logan, UT) and from 9-10 a.m. prior to the funeral Saturday morning. Interment will be in the Wanship City Cemetery at 3:30 p.m. He was cared for by CNS Hospice & Dr. Steven Salisbury. They were wonderful in their care of dad and became part of our family. Condolences may be shared online at www.allenmortuaries.net.

Vern G. Stembridge passed away on July 3, 2021. He was born December 20, 1931 to Gordon & Evelyn Stembridge in Oakley, Utah. He was the 2nd of 5 children. The family lived in Peoa, Utah where they farmed and ranched. When he completed high... View Obituary & Service Information

The family of Vern G. Stembridge created this Life Tributes page to make it easy to share your memories.

Send flowers to the Stembridge family.