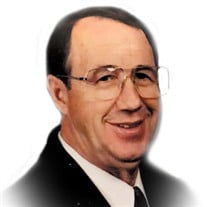 Verne Edward Bray, 84 – A longtime resident of North Logan, UT passed from this life on the morning of Nov 12, 2020 at Maple Springs Assisted Living Facility to join his dear wife, Beverly and daughter, Gail. We feel certain it was a joyful reunion. Verne was born Dec 28, 1935 in Spokane, WA to Clarence Edward Bray and Mabel Willetta Judd joining a sister - Lucille. Tumbling in behind him, each a few years apart came Doris, Mary, Ruth, Lois and Bob. Ruth passed away as a very little girl, and he always remembered the pain of little Ruthie being gone. He grew up in and around the eastern side of Washington State – spending a great deal of his growing up years in the home of his maternal grandparents – Royal B and Nancy Jane Judd in Inchelium, WA, whom he loved very much. Verne attended John Rogers High School I Spokane, WA where he met and caught the attention of Beverly Lois Burke. They were married on August 23, 1954. They joined the Church of Jesus Christ of Latter Day Saints in December 1959 and were later sealed in the Idaho Falls Temple for time and all eternity on August 21, 1962. Verne and Beverly are the parents of five children – Nancy Lee Bray Steele (Brian), Cindy Lou Bray Hopkins (Michael), Scott Patrick Bray, Daniel Edward Bray and Beverly Gail Bray Kirby-deceased (Jeff). They are grandparents to 21 grandchildren, 46 great-grandchildren and 1 great great granddaughter. Verne had several different forms of employment through his lifetime beginning as a 13 year old boy as a dishwasher and moving up to a waiter at the now historic Davenport Hotel in downtown Spokane. He was always employed once he started that journey. Verne enjoyed the workings and challenges of business and ventured into many types of business. His greatest joy of work however - was found in Family History where he worked tirelessly on finding names of ancestors and their personal history and served for several years at the Family History Center. Verne served in the Air Force Reserves at Fairchild Air Force Base in Geiger Heights, WA. He attended college at Spokane Community College and later while working at Boeing as an engineer, he attended University of Washington. He always enjoyed learning, and continued taking college courses from time to time. Verne and Beverly moved to Logan from Spokane in Sept 1975. Then they built a home in North Logan in 1983 where they lived for the rest of their earthly lives and made many friends and enjoyed their neighborhood family and neighborhood gatherings and chats very much. He had great yard care competitors in their neighborhood which generated additional fun! He and Beverly always found pleasure taking care of their home and surrounding yard. Verne loved his Bishops and ward members through the years and the opportunities he had to be able to serve. Verne’s pleasures in life cannot be left without mentioning how he really enjoyed his fishing buddies and trips – but neither can we forget how he played such great jokes on many of us. The kindness and care Verne received at Maple Springs by the staff were a blessing to him and appreciated by Verne and his family. The gentle and caring services given for both Beverly and Verne by CNS were wonderful. Dr. Steven Salisbury has been their physician for many years and was a dear friend and caring doctor. Verne and Beverly’s family want to thank each person who helped make their last days a little gentler. Verne is preceded in death by his wife Beverly, his daughter Gail, his parents and grandparents, his brother Bob, sisters Lucy, Doris, Mary and Ruth, and three great grandchildren. He is survived by their children Nancy, Cindy, Scott, Dan , 21 grandchildren, 43 great grandchildren, 1 great great grandchild, his sister Lois Suderman, as well as many cousins, nieces and nephews. Private family service due to Covid-19 will be held Saturday, Nov. 21, 2020 beginning at 10:00am.

Verne Edward Bray, 84 &#8211; A longtime resident of North Logan, UT passed from this life on the morning of Nov 12, 2020 at Maple Springs Assisted Living Facility to join his dear wife, Beverly and daughter, Gail. We feel certain it was a... View Obituary & Service Information

The family of Verne Edward Bray created this Life Tributes page to make it easy to share your memories.

Send flowers to the Bray family.