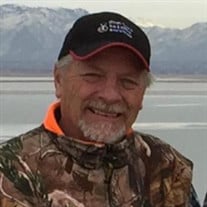 Vincent Lynn Goldsberry, age 73, passed from this life into the next surrounded by his family in the early morning hours of February 8, 2022 after a 13-month long difficult battle with cancer. Lynn was born in Logan, Utah on July 9, 1948 to Vincent Bradshaw Goldsberry & Ferris Luta Shaw Goldsberry. He grew up in Paradise, Utah. He had a great childhood growing up in a small town. He attended Paradise Elementary, Wellsville Jr High, South Cache High, and Sky View High School, graduating in 1966. He then went to Salt Lake Technical College studying electronics & graduated in 1968. In the summer of 1967 he met a young car-hop named Susan, at the Arctic Circle Drive-in on North Main street in Logan. He asked her on a date & they dated the rest of the summer. When he went back to Salt Lake for school, he came home every weekend so they could see each other. They were married on Aug. 23, 1968. He began working at Moore Business Forms in Sept. 1968 & worked there for 41 years, (it was later called RR Donnelly). He retired from there in 2009 at the age of 62. He made many life long friends there. After retirement, early every morning he enjoyed meeting with friends at the Hyrum Chevron to drink a coke & visit. He & Susan built their first home in Millville in 1971 & had three children, Angie, Tami, & Ryan. From the time Lynn was a little boy he wanted a horse. His Dad wouldn’t get him one, but that was always a dream of his. In 1985 he decided it was time to find horse property. He & Susan looked at property, & houses with property, all over the valley. They eventually purchased horse property in the south fields of Millville. They built their new home in 1987. The next year he built his barn & fenced in the pasture. He worked on that fence every day all summer long, then went to work on swing-shift. He finally found a horse he liked & enjoyed going horse riding with his buddies, but he wanted Susan to ride also. They found a horse for her & he signed them both up for a horse class at USU. They went every week for a full quarter so Susan could learn to ride. They went on many horse rides together with family & friends. Riding horses was the thing he enjoyed most. Lynn was an avid hunter, fisherman, & all around outdoorsman. He was a very hard worker & expected his family to work hard too. It was important to him to take his family on a summer vacation each year. It was always camping & usually to a place they had never been before. However, he got the bug for white water rafting & bought his own raft. After that, floating the Snake River in Wyoming was something they did at least once a summer, if not more. Friends & family were always invited along. There were many, many family camping trips up Logan Canyon with Susan’s family & they visited nearly every National Park in Utah & surrounding states. Most recently, he & Susan traveled with family members to Italy for the open house of the Rome Temple. He couldn’t wait to show his kids the beautiful pictures & raved about the scenic Amalfi Coast. He was a member of the Church of Jesus Christ of Latter Day Saints & was very proud of his pioneer heritage. He & Susan were sealed in the Logan Temple in 2018 after 50 years of marriage. Lynn is survived by his wife, Susan; daughters Angie (Ken) Nelson, Tami (Jayson) Curtis, son Ryan Lynn Goldsberry. Brothers, Gordon (Audrie) Goldsberry, Clinton (Denise) Goldsberry, mother-in-law Lorene Pitkin, brother-in-law Robert Trimble, sister and brother-in-laws Nancy Pitkin & Gary Buttars, Debbie Pitkin and Glade Smith, Rodney and Lori Pitkin. Grandchildren, Gracie, Kayden & Charlie Curtis & many nieces and nephews. Lynn was preceded in death by his parents, sisters, Reneal Trimble & Rosann Wilson, & father-in-law Cecil Lyle Pitkin. The family would like to thank his nurses & doctors, especially Jaden Evans, MD, at the Logan & St. George Cancer Centers, and the IHC hospice nurses. In lieu of flowers, please take your kids/grandkids out for a special treat, which is something Lynn loved to do. Funeral services will be held on Saturday, February 12th at 12:00 pm in the Millville LDS Chapel, 110 South Main. There will be a viewing held on Friday evening from 6-8 pm at the Allen-Hall Mortuary and also at the church on Saturday from 10:30 - 11:30 am. Funeral services will be broadcast via the following link: https://us02web.zoom.us/j/88019625859?pwd=eXppZzJydks3YzZIQ0FBMk9TU0F0dz09 Password: Goldsberry Interment at the Paradise Cemetery.

Vincent Lynn Goldsberry, age 73, passed from this life into the next surrounded by his family in the early morning hours of February 8, 2022 after a 13-month long difficult battle with cancer. Lynn was born in Logan, Utah on July 9, 1948 to... View Obituary & Service Information

Vincent Lynn Goldsberry, age 73, passed from this life into the...

Send flowers to the Goldsberry family.