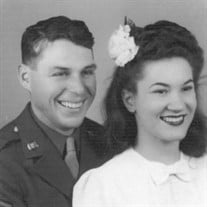 Warren Lee Olsen, son of Lee Elmo Olsen and Catherine Fletcher and born on 2 August 1921 passed away on 8 October 2021 after 100+ years of life. Warren was born at home in Young Ward, Utah, and raised on the family farm where he learned the value of hard work and honesty. He married Barbara Wood of Logan, Utah on 15 February 1942 and raised 2 sons, Roger and Jeffrey while living in Ogden, Utah after returning from World War II where he was assigned to the 66th Division (Black Panther Division) serving in France with the unit and involved in pushing back the German offense in the Ardennes and other areas. While there Warren was wounded when a German Panzer tank fired on him and a fellow Soldier while they were inspecting communications wire for the unit. His primary unit with the Division was in artillery which continued as a life long partnership through artillery units of the Utah National Guard and retiring at the rank of Master Sergeant and total of 35 years of service. After returning from the war, Warren worked to get his college degree from Weber State College and was building his own home with Barbara on Canyon Road in Ogden. He joined the Bureau of Reclamation and worked a number of projects in the Utah region to include the Willard Dike and Lost Creek reservoir. After a drawdown of the Bureau, Warren was transferred to the then Defense Depot Ogden, also known locally as "2nd Street" and worked there until he was able to retire. He then began a job with the State of Utah working construction projects and eventually took a job with Ogden City Schools driving buses for special events and special needs children. At 87 he left daily employment and continued living in the home that he and Barbara built, raising their sons there. Lifelong members of the Ogden 21st Ward, Warren and Barbara served however asked. Barbara, because of the Church of Jesus Christ of Latter-day Saints emphasis on genealogy, became an excellent genealogist long before automated systems. Her work has served as the foundation for much of the family's online genealogy now available on the Olsen and Wood families. After retirement, Warren would go with his youngest brother Christian on his 18-wheeler round trips from Logan to California and back. He enjoyed the trips because it gave him a chance to get to know his youngest sibling who was quite young when Warren left home to marry and go also to WWII. Warren was an Elder in the Church of Jesus Christ of Latter-day Saints and was sealed to Barbara, his lifelong sweetheart, in the Houston Temple. He is survived by his 2 sons, Jeffrey and Roger as well as grandchildren and great grandchildren. He was preceded in death by his bride Barbara, parents and 5 siblings. Graveside services are under the direction of Allen-Hall Mortuary and will take place Thursday, October 14, 2021 beginning at 3pm in the Smithfield City Cemetery. A viewing will take place from from 1 to 2:30pm at Allen-Hall Mortuary, 34 East Center Street in Logan. Condolences may be expressed online at www.allenmortuaries.net

Warren Lee Olsen, son of Lee Elmo Olsen and Catherine Fletcher and born on 2 August 1921 passed away on 8 October 2021 after 100+ years of life. Warren was born at home in Young Ward, Utah, and raised on the family farm where he learned the... View Obituary & Service Information

The family of Warren Lee Olsen created this Life Tributes page to make it easy to share your memories.

Send flowers to the Olsen family.