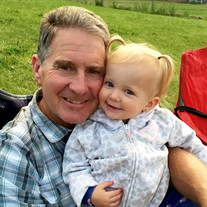 On Saturday, October 24th at age 69, our beloved husband, father, brother, son, and friend, peacefully entered eternal life. He was surrounded by his adoring family as he was released from a long and courageous journey with cancer into a place of rest and comfort. Wayne was born in Logan, Utah on August 28th, 1951 to Gaylen Lamb Ashcroft and Elaine Thompson Ashcroft. Wayne was the oldest of five children. If his stories are accurate, he was a model child. He attended Sky View High School where he played football and spent weekends skiing, something he loved doing throughout his life and that few people do as gracefully as he did. But he found something else on that ski slope that he loved even more, and her name was Joyce. On May 10, 1973, after serving a two-year mission for The Church of Jesus Christ of Latter-day Saints in the Delaware/Maryland Spanish Speaking Mission, and then the Florida South Mission which included Puerto Rico. Wayne and Joyce were sealed for time and all eternity in the Logan LDS Temple. Wayne and Joyce raised their family in Logan. During that time, he served in many volunteer church service roles including Bishop & Bishopric member, High Council, Mission Leader, and Gospel Doctrine teacher. For the last 19 years of his life, he worked at the Logan Temple serving many of those years as the Custodial Supervisor. He also ministered to his family and his community through years of coaching competitive and high school soccer. He had a genuine love for the game and for those he coached. He taught skills that are not only valuable on the field but in life: hard work, determination, perseverance, and teamwork. Although his life was cut short, Wayne lived it to the fullest. He did not walk through Disneyland, he ran. Literally. Dodging obstacles and small children as he went. And the rest of us just tried to keep up. That is how he ran his race. He always made the most of the time he was given, and family always came first. He showed us where to find true happiness and shared more than a lifetime’s worth of joy with those close to him. He taught us to love the outdoors, skiing, cycling, soccer, running, kayaking, Neil Diamond, vacuum lines, and beds made with hospital corners. He taught us to appreciate beauty, to serve gladly, and to face both opportunities and challenges with courage. And he taught us the importance of warming up for a run or soccer game with dynamic stretches as opposed to stationary ones — so appropriate being the active and dynamic person that he was. A force for good who worked hard and served tirelessly. His life was a success story in profound and powerful ways. He was not wealthy but gave love and kindness freely. His fame may not have extended beyond Cache Valley, but he inspired and uplifted all who knew him. He did not command an army but cheered and supported others through their personal battles with open arms and helped them realize the depth of their capacity to succeed. He believed in everyone. He did not hold a political office but exemplified acceptance and tolerance in the way he lived his life, every day. He did not win any academy awards but if integrity were an Oscar, it would go to Wayne. He was in every sense, a hero. While there is so much more we could say about him, we know that if Wayne were to have written his own obituary, he would first, have started by telling a few good jokes, and then would want to thank so many for being there for him. For the family and friends who sent words of love and encouragement to carry him along the rough road he traveled, the doctors and nurses who gave him such gentle, loving care, and for the family that laughed, loved, and stood next to him until the end. He would have wanted to thank all the teachers, leaders, friends, and family who had an impact on his life. Those who taught, supported, or inspired him. Then he would have wanted to remind us to hold each other close and to recognize that lasting peace and joy come in living as the Savior did and through being grateful for the many blessings in our lives. He was one of the greatest in ours. Wayne is survived by his devoted wife and best friend, Joyce; their seven children: Candice (Tyler) Jensen, Nicole (Luke) Rothey, Casey (Katie) Ashcroft, Dustin (Heather) Ashcroft, Tara (Brigham) Crane, Christian Ashcroft and Bretton Ashcroft; seventeen grandchildren; his parents, Gaylen and Elaine Ashcroft; four siblings: Dee (LeAnne) Ashcroft, Lynda (Jeff) Gittins, Gayle (Harold) Coon, and Kerri (Paul) Spackman; and many in-laws, nieces, nephews, and family too numerous to list but not forgotten. He was reunited with his granddaughter Hadlee Jane Ashcroft. We look forward to being with him again. Let not your heart be troubled; for in my Father’s house are many mansions, and I have prepared a place for you; and where my Father and I am, there ye shall be also. Doctrine & Covenants 98:18 Services are under the direction of Allen-Hall Mortuary. A viewing will take place Thursday, October 29, 2020 from 6 to 8pm at Allen-Hall Mortuary, 34 East Center in Logan. Due to the Covid-19 circumstances, a funeral for only family members to attend will be held Friday, October 30th beginning at 11:00 am at the Dry Canyon Ward chapel, 1350 Eastridge Circle in Logan. Services will be live streamed online for the public and may be viewed at www.allenmortuaries.net. Interment will take place in the Logan City Cemetery.

On Saturday, October 24th at age 69, our beloved husband, father, brother, son, and friend, peacefully entered eternal life. He was surrounded by his adoring family as he was released from a long and courageous journey with cancer into a place... View Obituary & Service Information

Send flowers to the Ashcroft family.