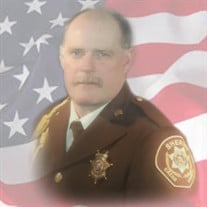 Wayne “Louie” Lewis On Friday November 12th at McKay-Dee Hospital, surrounded by his wife and children, Wayne Lewis, Husband, Father, Grandfather and friend, unexpectedly passed away. Wayne was born on June 21st 1959 in Portland Maine to Royce Lewis and Pauline (Whitten) Lewis. At 2 years old he moved to Sitka Alaska and from there he moved to Northern California. After high school he moved to Utah, which is where he met and married his first wife Debra Speakman in 1982. It was here that he had and raised his most cherished accomplishments, his four children: Christopher, Meghan, James and Jessica. He started what would fatefully be one of his great callings in life at the Cache County Sheriff’s office in 1989. In 2011 Wayne married the love of his life, Diane Byington, and welcomed into his family his stepson Tyler Runchel. One of Wayne’s greatest passions in life was helping people. He was a dedicated member of Law Enforcement for over 20 years. During his time he received multiple awards such as Deputy of the year, Sheriff's Recognition Award, and two Medal of Valors. After his retirement he taught law enforcement class at Cache High. He thoroughly enjoyed teaching and truly loved all of those kids that came through his class, as well as all of the great people that he worked with. The memories and stories are too many to tell. Wayne loved so many things. He loved good food and cooking and would happily relay every detail of every ingredient he used to make his newest recipe. He was the most patriotic man you could know, many saw him riding around town on his motorcycle decked front to back in an American Flag decal. He was tremendously proud of his two sons who both served our Country, Chris in the Air Force, James in the Army. He loved Country music, vacations to the beach, fresh seafood, a good old fashioned sexist joke (even though he was ALL TALK), Movies and CD’s, long motorcycle rides. Teasing was his love language but everyone who knew him well knew that he was just a big soft teddy bear at heart. Wayne is survived by his wife, Diane (Byington) Lewis, his children, Christopher (Laura) Lewis, Meghan (Dan) Croft, Jessica Lewis, Tyler (Ashlyn) Runchel, his Mother Pauline (Whitten) Lewis, his brother Dave Lewis, and his cherished seven grandchildren. Wayne was preceded in death by his Father Royce Lewis, his son James Lewis, and his Father-in-law Dale Byington. A Celebration of Life will be held Friday November 19th at 12:00 (Noon) at the Allen-Hall Mortuary, 34 East Center Street in Logan, Utah. For close friends and family, a visitation will be held at the Mortuary from 10:30 -11:30am. Condolences may be expressed online at www.allenmortuaries.net

The family of Wayne Royce "Louie" Lewis created this Life Tributes page to make it easy to share your memories.

Send flowers to the Lewis family.