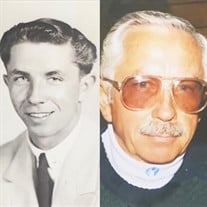 Wendell Joseph Liechty passed away peacefully in the early morning hours of September 1, 2021 after a long eight year battle from a stroke. He was born June 13, 1935 to Joseph Liechty and Mary Edna Cuthbert Liechty. He was the youngest of two children. His childhood was spent in Logan riding his bike and hauling his fishing pole up to first dam. He helped his dad working at Joe’s Lunch, and spent the summers up on the ranch in American Falls working for his brother in law. He loved to play baseball and was an amazing artist. He spent his entire childhood being mischievous. He spent more time up Logan Canyon hunting, fishing, and skiing with his buddies than anything else. Wendell met the love of his life Cheryl Fisher on a blind date set up by her brother-in-law. She stayed home and held down the fort when he was drafted in the Army in 1958 and served for two years in Garmisch, Germany. He was assigned special duty on the Army Ski Patrol in Garmisch. He was a member of the Beaver Mountain Ski Patrol for over sixty five years and earned his National number, #2918. He valued and treasured all the great associations at Beaver Mountain. His passions in life were golfing, hunting, fishing and skiing. He went up to Alaska every year for thirty years hauling home tons of salmon and halibut. He was a proud part owner of Bridgerland Plumbing Supply for twenty years, when that was sold he continued to work for other supply houses in the valley. He absolutely loved hosting and spending time with his family and friends at his beloved cabin in Bear Lake, making memories with all the kids, grandkids and their friends. He was an excellent cook. His breakfast at the cabin was legendary. Making “belly pads” spiked with beer, a side of dead hog and embryos of unborn fowl. His jerky recipes were famous. He taught his kids and grandkids how to clean animals and trim them up for jerky “roadkill” at a young age. He was always out hunting for wood, and there was never a dead tree that didn’t catch the attention of his chainsaw. He worked his kids and grandkids hard over the years hauling, splitting, and stacking wood. You could always find him cruising around with a “road soda” on the 4-wheeler, looking for somebody to visit with. Wendell is survived by his amazing wife Cheryl Fisher Liechty of sixty four years, and children Tonya (Todd) Benson, Julie (Todd) Chapman, Mike (Laura) Liechty, Steven (Cami) Liechty. Fifteen grandchildren and their spouses, six great grandchildren, and three more on the way. Proceeding in death are his parents Joseph and Edna Liechty, sister Darlene (Bill) Barkdull. The family wants to express their great love and appreciation to all the caregivers that have watched over him the last five years. Graveside service will be held at the Logan City Cemetery at 12:00 PM on Friday, September 10, with military rites. 1000 N 1200 E Logan, UT. Celebration of life will be held at the Logan Golf & Country Club from 1:00-3:00 PM Saturday September 11. Services are provided by Allen-Hall Mortuary.

Wendell Joseph Liechty passed away peacefully in the early morning hours of September 1, 2021 after a long eight year battle from a stroke. He was born June 13, 1935 to Joseph Liechty and Mary Edna Cuthbert Liechty. He was the youngest of two... View Obituary & Service Information

The family of Wendell Joseph Liechty created this Life Tributes page to make it easy to share your memories.

Wendell Joseph Liechty passed away peacefully in the early morning...

Send flowers to the Liechty family.