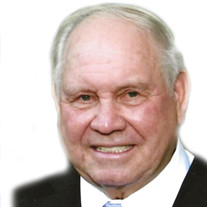 Our beloved husband, father, grandfather, uncle and friend, Wesley Delore Johnson, completed his earthly life in the early morning hours of August 3rd. Wes was born in Paradise, Utah, on April 18, 1936, the son of Palmer and Bertha Rawlins Johnson. He was the 12th of 13 children and spent his childhood growing up in Paradise. He had many great years with his 5 brothers and 7 sisters, whether they were playing football and softball in the pasture or doing chores and working jobs to help support their large family. Some of his fondest childhood memories were the times he spent riding around on the Monarch bicycle he’d saved up to buy with his brothers Paul and Darrell. Wes also loved when the whole family, extended relatives and all, would gather around Daddy’s fiddle, Darrell’s guitar and Earl’s harmonica for a singalong. He attended South Cache High, which is where he met a cute girl from Petersboro, Merlene Yonk, in seminary class. The King and Queen of the Sweetheart’s Ball graduated from high school in 1955 and dated while they both attended Utah State University. After four years of courting, Wes finally agreed to marry Merlene. (Of course, if you ask her, it happened the other way around.) They were married in the Logan Temple on August 7,1959, and would go on to spend 62 unforgettable years together, working hard and creating a wonderful life for their family. Wes and Merlene’s early years were spent in Ogden then Sandy, where Wes built homes and Merlene taught junior high school until their first daughter was born. During the Berlin Crisis, Wes was called up to active service in the military and stationed in Ft. Lewis, Wash. After being released from active duty, the family of three moved back to Cache Valley, where Wes worked as a general contractor and the rest of their five children were born. Wes’s creative skills combined with hard work resulted in a successful career. Our father and dad was the hardest worker we know and there are many beautiful homes here in Cache Valley that are evidence of that hard work. He not only built houses and apartments but also forged many lasting friendships with the people he worked alongside. Wes had a strong testimony of the gospel and was a lifelong member of the Church of Jesus Christ of Latter-day Saints. He served in a variety of callings, but he especially enjoyed the time he spent serving as a temple worker in the Logan Temple. He said there was never a day when he didn’t believe in his Savior, Jesus Christ. Wes is survived by his loving and dedicated wife of 62 years, Merlene Yonk Johnson, and his six children, Teresa (Craig) Smith, Wesley Dee (Dayna), Jennifer (Kimball) Fife, Timothy (Jenny), Benjamin (Stacy) and Matthew (Jennie Lynn), as well as his 22 grandchildren and 7 great grandchildren, all of whom he adored. He is also survived by his sister, Betty (Therald) Quayle. He was preceded in death by his parents, Palmer and Bertha Johnson; brothers, Earl (Arlene), Keith (Muriel); Ray (Norma), Darrell (Anna Laura, living), and Paul; sisters, Esther (Dell) Saltern, Lucille (Ford) Yeates, Norma (Wendell) Thompson, Cleo (Earl) Knighton, Leda (Gordon) Sutherland, and Vonda (Dean) Cheney; and baby granddaughter, Rachel. When we think of our sweet husband and father, many things come to mind. He loved craftsmanship. He admired hard work, and calling someone a “hard worker” was his ultimate praise. He took so much effort to leave everything he was involved in better off because of his talent for creativity. He loved beautiful things — his collection of paintings, music his grandkids would play for him on the grand piano, and the view from his cabin. Oh, how he loved the cabin! He spent many happy days at that cabin up Logan Canyon, both working to refine the natural beauty of the surrounding landscape and relaxing in the company of his family. He loved and served others. He had a generous heart and was always willing to help those in need. He loved to make people laugh. He liked telling a good joke or story, and his many “one-liners” are the stuff of family legend. He loved his grandkids, who in turn loved his bear hugs. He enjoyed gathering his whole family for one week at Bear Lake each summer, where we’d play games and spend time at the beach. He loved good food, especially Merlene’s Sunday dinners. He loved Merlene, his lifelong sweetheart, his smart and talented companion. To him, there was nothing more beautiful than his beautiful woman. He loved every second of the life they built together. And we love him dearly. Services are under the direction of Allen-Hall Mortuary. Wes's life will be celebrated Monday, August 9th at 12 p.m. at the church house on 500 N. and 100 E., Logan, with a viewing prior from 10:00 - 11:30 a.m. Burial with military honors will follow at the Logan Cemetery. We love you, Wes! In his words, it was a good life! Condolences may be expressed online at www.allenmortuaries.net

The family of Wesley Delore Johnson created this Life Tributes page to make it easy to share your memories.