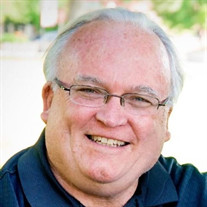 Wiley Ezra Cragun, Jr., 72, beloved husband, father, grandfather, brother, and friend, died in San Antonio, TX, on January 16, 2021, of long-term complications from surgery and COVID-19. Wiley is known by friends and colleagues around the world for his exceptional kindness and patience, and he will be sorely missed. Wiley was born in Logan, Utah, on August 2, 1948, to Wiley Ezra and Margaret Hellewell Cragun. He was their fourth child and only son. Wiley grew up in Lewiston and Logan, where he was a champion swimmer at Logan High School and later at Utah State University. He married Carla Jean Carter in the Logan Temple of the Church of Jesus Christ of Latter-day Saints on April 16, 1971, and they immediately set off on a 50-year adventure around the world, raising their six children in California, Texas, Germany, Utah, Montana, Nevada, Maryland, the Democratic Republic of the Congo (Zaire), Mexico, and Chile. They settled in San Antonio, TX, in 1999 and have embraced it as they did every other home, considering themselves true Texans. Wiley and Carla were a loving companionship, serving together in many church callings. They have been a remarkable example of unconditional love and commitment for their children and for many others. Wiley was a very involved father. He loved reading to his children and grandchildren, leading them on explorations, and talking with them about subjects great and small. He loved sports throughout his life, especially basketball and football, often rooting for the underdog. He became an instant fan of any college attended by his children or their spouses, numerous family friends, and of any of the many universities where he had taken a class – but deep down he was a true blue Utah State Aggie and a die-hard Spurs fan. Wiley had an exceptional talent for languages, was fluent in several, and dabbled in many more. He could often be found reading, watching documentaries, or listening to podcasts in Spanish, Portuguese, or Lingala. It was his life’s work and his hobby. He used this talent in 42 years of service to his country – as a linguist in the U.S. Army and then as a linguist and analyst for the National Security Agency. He also used his extensive language skills in church service, taking a leadership role in the first translation of excerpts of the Book of Mormon and other church materials into Lingala. He was committed to his church and his covenants. Wiley served as a missionary in the Northern Argentine Mission from 1967-1969. He was a member of the temple committee during the planning and building of the San Antonio Temple and then served faithfully as a temple worker for 15 years, including as a shift coordinator and trainer. He served in bishoprics and on the high council, and was the first elder’s quorum president ever called in the DRC. He will be remembered by many as a compassionate ministering brother, teacher, and mentor. Families around the world and his grandchildren will remember him fondly as the perfect personification of Santa Claus. He delighted children for many years at Embassy and church Christmas parties and later with Christmas Eve visits and Skype calls. In spite of his numerous accomplishments, many of which were behind the scenes, Wiley was remarkably humble. He was faithful, loving, loyal, and fun, always happy to see you and have a chat. We will miss him terribly and look forward to the day we’ll meet again. He is survived by his wife of nearly 50 years, Carla Jean Cragun, San Antonio, TX; six children, Amy Cragun Hall (John), Warsaw, Poland, Wiley Patrick Cragun (Eliza), Sydney, Australia, Nicole Michelle Crandall (Wade), Bountiful, UT, Holly Jeannine Cragun, Provo, UT, Caroline Elizabeth Cragun, San Antonio, TX, and Caitlin Margaret Cragun, San Antonio, TX; 10 grandchildren, Abigail, John, Paige, Carter, Sarah Evelyn, Zoe, Madelyn, Samuel, James, and Amelia; two sisters, Margaret Ann Schvaneveldt (Noel), North Odgen, UT, and Mildred Delphia Watts (Gary), Provo, UT; a brother-in-law, Steve Larsen (DeLois), Garden City, UT; and many beloved nieces and nephews. He was preceded in death by his parents; his sister Elizabeth Cragun Larsen; and his son Ezra Carter Cragun. Funeral services will be held at 12:30 p.m. on Tuesday, February 9, at Allen-Hall Mortuary, 34 E. Center Street, Logan, UT. Family and friends may call at 11 a.m. until the time of services at the mortuary. Burial with military honors will be in the Logan City Cemetery. Condolences and thoughts may be expressed online at www.allenmortuaries.net. The family wishes to thank the nurses and staff at Methodist Stone Oak Hospital in San Antonio, TX, for their kind and compassionate care. Services will be livestreamed and can be viewed via the following link: https://us02web.zoom.us/j/87458564374?pwd=b2VsZG9seXFRRHQwVGp6YktISFZKQT09 Password: Cragun

Send flowers to the Cragun family.